ViewSonic has introduced the PX701-4K, PX748-4K, and M2e projectors. The PX701-4K and PX748-4K ViewSonic projectors use the latest DLP XPR chip from Texas Instruments. It provides support for HDR and HLG content. The hardware resolution of these projectors is 4K (3840 x 2160 pixels).

The ViewSonic PX701-4K has a maximum brightness of 3200 lumens (ANSI), a refresh rate of 240 Hz, and a response time of 5 ms (the manufacturer quotes this data for 1080p resolution). The advantages of the PX701-4K DLP projector include ease of installation with automatic geometric distortion correction. The home entertainment projector is equipped with HDMI 2.0, USB 2.0, and RS232 interfaces, as well as an audio output. Lamp life reaches 20,000 hours.

The PX748-4K home theater projector features 4000 lumens (ANSI) brightness and a USB Type-C connector. This 1.3x zoom model has automatic vertical keystone correction and adjustment to all four corners of the frame. The description mentions home automation ready with LAN control and 12V start-up. The projector 4K supports a 240Hz refresh rate and 5ms response time (as above, this data is for 1080p). The device includes HDMI 2.0 and USB Type-C interfaces, as well as an audio output.

The M2e is portable. It is equipped with a built-in Harman Kardon speaker system, supports Bluetooth and Wi-Fi. The resolution of the LED projector is 1920 x 1080 pixels. A single USB Type-C cable is used to simplify wiring. The projector boasts Advanced Instant AF and Automatic Vertical Keystone Correction. It covers 125% of the Rec.709 color space. The patented Cinema SuperColor+ technology was tried on to improve color rendering. The M2e weighs only 1 kg. The projector includes HDMI 2.0, MicroSD slot, and audio output.

Recently, ViewSonic has announced an interesting display tablet, called ID1330 ViewBoard Pen Display, which, among other things, will help organize the process of distance learning or remote work, priced at $349.99.

He started this blog as a hobby to show his affection for gadgets, but over the time this hobby became professional. And now he is working as a full-time blogger, but in free time he loves watching movies and games. PayPal donation for TechToyReviews will be appreciated.
@ankit4554
Previous Samsung Galaxy Buds Pro Review: The Most Demanding Earbuds
Next Asus ROG Swift PG259QN Review: Do Gamers need a 360Hz Display? 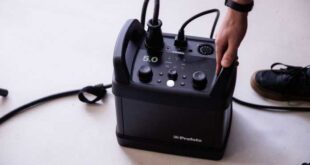