After so many leaks and rumors, Today on Tuesday the company introduced the third generation of the Moto G (Gen 3) in India ahead of launches in New York, Sao Paulo and London. 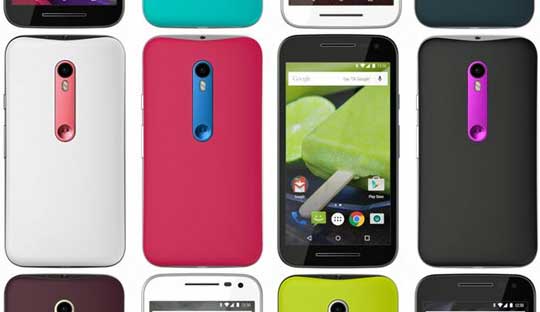 A budget smartphone Moto G 2nd Generation has been already very popular among buyers and Motorola has managed to once again become a real player in the Indian smartphone market. The main changes are focused on the Camera, RAM and the Memory. The Motorola Moto G Gen 3 features a 13-megapixel rear camera with Dual-LED flash and f/2.0 lens while a 5-megapixel front-facing camera to capture wonderful selfies.

The Motorola Moto G 3rd Gen comes with a 5-inch IPS display with HD resolution of 720×1080 pixels and protected by Corning Gorilla Glass 3, on the front side of the device there are two speakers, there was a slot for memory microSD cards, there are two slots for SIM-cards. The device is powered by a 1.4GHz quad-core processor, Qualcomm Snapdragon 410 SoC with an Adreno 306 GPU.

New Moto G 2015 4G LTE is also comes with interchangeable back covers available in different colors. As for the operating system, it is runs latest Android 5.1 Lollipop OS and packs a 2470mAh battery out of the box. Check out Moto G 3rd Gen Specs below:

Thanks for reading! If my article helped you, I would be happy if you visit Techtoyreviews again and follow it on Social media. This article contains partner "affiliate" links. Clicking on it will take you to the provider and if you make a purchase, Techtoyreviews will receive a small amount of support.
@Techtoynews
Previous Gionee Pioneer P2M with 3G Dual-SIM and 3000mAh Battery Launched
Next Moto X Style and Moto X Play Launched: 21MP 4K camera, 3GB RAM and 64GB ROM