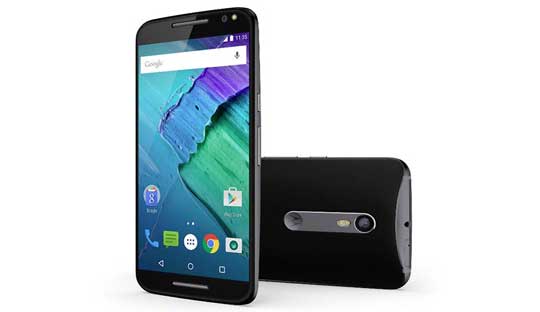 The Moto X Style has expanded the display size up to 5.7-inch, a 1440 x 2560 pixels resolution and almost cover a 76% front area of the device, quite more compared to the Galaxy S6 Edge (71%) and iPhone 6 Plus (68%). It is powered by Snapdragon 808 processor with 3GB RAM, 16GB of internal memory and external memory card slot to expand memory. The Moto X features a 21-megapixel rear camera with f/2.0 lens, dual tone LED flash instead of round flash as Moto X 2014 which was not appreciated and also supports 4K video recording. While it has a 5-megapixel front-facing camera which is also integrated with LED flash.

The Motorola Moto X Style features fast charging technology, which 50% faster than the Samsung Galaxy S6 according to the company, 34% of charge in just 15 minutes. Motorola calls it Turbocharger technology. The Moto X Style is also found as Moto X Pure Edition in the US.

Meanwhile the Motorola Moto X Play has a slightly different design at the back side, more highlighted outline and waterproof design. It features a 5.5-inch display with a Full HD 1920×1080 pixels resolution and 21-megapixel rear camera similar to the Moto X Style, of course, without 4K video capabilities. It is powered by Snapdragon 615 SoC, 2GB of RAM and 16GB/32GB internal memory with an external memory card slot.

The Moto X Play with 3630mAh battery capacity, more than the Moto X Style – 3000mAh, and also support Motorola’s Turbocharger Technology. At the time Motorola has not announced the price for Moto X Style and Moto X Play. But the Moto X Pure Edition Unlocked version priced at $ 399.

Thanks for reading! If my article helped you, I would be happy if you visit Techtoyreviews again and follow it on Social media. This article contains partner "affiliate" links. Clicking on it will take you to the provider and if you make a purchase, Techtoyreviews will receive a small amount of support.
@Techtoynews
Previous Motorola Moto G Gen 3 2015 with 13MP Camera, 2GB RAM and 4G LTE Launched in India
Next Lenovo Z51 Quick Review: High profile Full-HD Laptop in affordable price