With the Moto G52, Motorola has introduced a new smartphone at an affordable price. The Motorola G52 is equipped with a 6.6-inch OLED screen and a triple camera with a 50 MP main sensor.

The Motorola Moto G52 is equipped with a 6.6-inch OLED panel, which has an aspect ratio of 20:9 with FHD+ and a pixel density of 402 PPI and refreshes at 90 Hz. A front camera with a resolution of 16 megapixels sits in a punch hole in the middle of the upper edge. A fingerprint sensor is located on the edge of the Motorola G52, which measures approx. 161 x 74 x 8 mm and weighs 169 g.

Motorola installed a triple camera on the back, consisting of a 50-megapixel main camera with an f/1.8 aperture, an 8-megapixel ultra-wide-angle lens, and a 2-megapixel depth sensor for bokeh effects. Under the hood of the smartphone, which is certified according to IP52, is the up to 2.4 GHz Qualcomm Snapdragon 680, which the manufacturer combines in the only available memory variant with 6 GB RAM and 128 GB flash memory. The storage space can be expanded by up to 1 TB using a microSD memory card.

The battery of the Motorola Moto G52 measures 5,000 mAh and charges up to 30 watts. Dual speakers with Dolby Atmos complete the equipment. Android 12 is pre-installed as the operating system ex-works, over which the manufacturer places its own My UX interface.

With the Moto G52, the Motorola brand is launching a new lower mid-range smartphone. The Motorola G52 is currently only available in selected countries, but the unlocked international version is listed on Amazon.com and Amazon.co.uk at $306 / £269. The smartphone is available in the two colors Charcoal Gray and Porcelain White.

Last month, Motorola introduced a new entry-level smartphone Moto E32 is supposed to convince customers with a 5,000 mAh battery, a 90 Hz display, and practical features such as an AUX connection at a reasonable price of $259.

He started this blog as a hobby to show his affection for gadgets, but over the time this hobby became professional. And now he is working as a full-time blogger, but in free time he loves watching movies and games. PayPal donation for TechToyReviews will be appreciated.
@https://twitter.com/Techtoynews
Previous Philips 27M1N3200VA 165Hz gaming monitor with 27-inch VA display
Next Lenovo launches ThinkPad P1 Gen 5 premium workstation without much fanfare 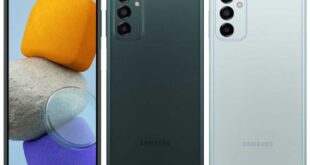