After an official announcement early this month, Lenovo has finally made available the Moto E4 smartphone in US via Amazon store. This is a budget smartphone is based on three fundamental specs such as a large display, rear camera with good quality, Android 7.1 Nougat OS, fingerprint sensor, and front LED flash for selfie. The Moto E4 price in USA is $129.99 for 16GB storage version will be available in Black color only. 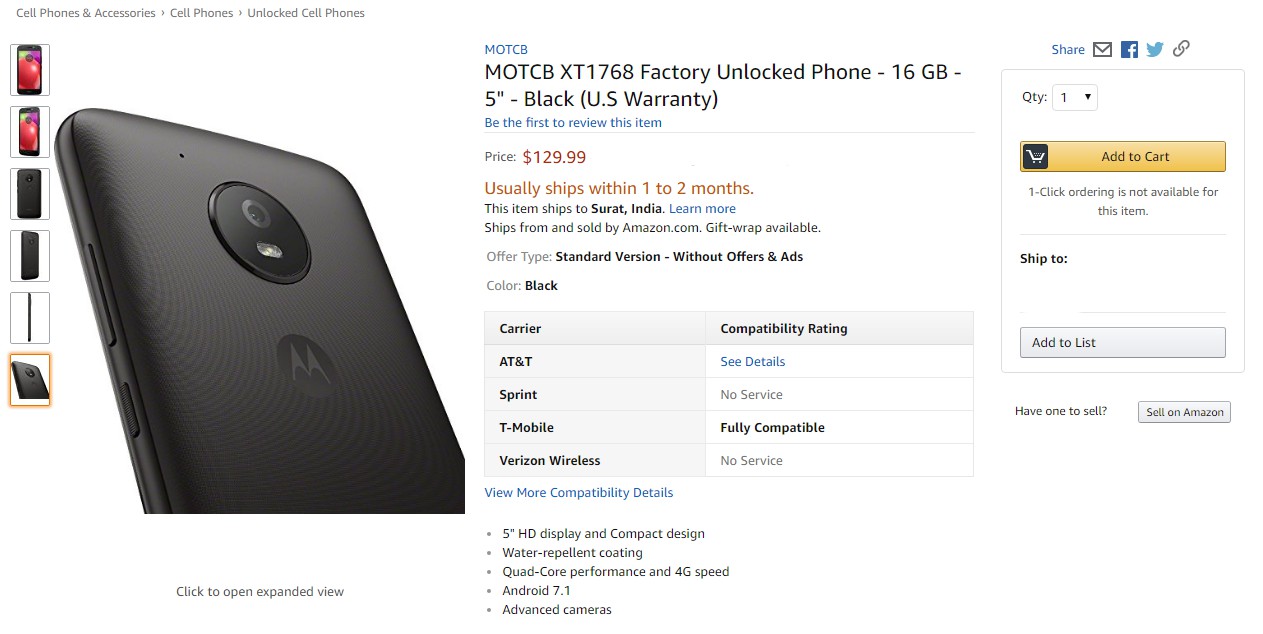 New Motorola Moto E4 flaunt a metal uni-body design with a circular camera frame and antenna lines. These smartphones have a Home Button with front fingerprint sensor packed underneath. There is a Motorola batwing logo and a speaker grille also situated at the back of the smartphone. The device has a Home Button in the front with the fingerprint sensor packed underneath, and the volume and power keys are both situated on the right edge of the smartphone. The 3.5mm audio jack is seen residing on top and both the smartphone also has a water repellent coating.

Coming to the specifications, the Lenovo Moto E4 comes with a single-SIM slot (Nano). It sports a 5-inch TFT LCD display with HD (720×1280 pixels) resolution and is powered by the 1.4GHz quad-core processor that’s fueled by Qualcomm Snapdragon 425 SoC paired with 2GB of RAM. The smartphone offers 16GB of internal storage option with the option to expand further using a microSD card slot up to 128GB.

As mentioned above, the device runs on Android 7.1 Nougat and packs a 2800mAh removable battery. For connectivity options include Wi-Fi 802.11n, Micro USB port, GPS, Bluetooth 4.1, and 4G support. Sensors on board include proximity, light, accelerometer, and magnetometer. The dimensions are at144.5 x 72 x 9.3 mm, and the smartphone weighs 150 grams.

Thanks for reading! If my article helped you, I would be happy if you visit Techtoyreviews again and follow it on Social media. This article contains partner "affiliate" links. Clicking on it will take you to the provider and if you make a purchase, Techtoyreviews will receive a small amount of support.
@Techtoynews
Previous Nyko launches Ton of Accessories for Nintendo Switch: Dock, Power Pak, Case and More
Next Samsung Galaxy J5 (2017) Price in UK, Gets Listed Online