Nokia Lumia 630 can be considered a successor version of the Lumia 620 with upgraded configurations, big screen and dual SIM supports. This phone launch to aimed to mid-range users in emerging markets such as India, where many people only need a smartphone device with an affordable price.

In style, just like all the previous Lumia versions, Nokia 630 Cases had plenty of color and provides the casing cap can interchangeably, consistent with the mood and your style, make the phone becomes more beautiful and not boring.
Besides black and white standards, you will have more choices of bright colors, include green, orange and yellow. As you should with 620 Lumia 630 has a similar design, only just slightly squared edges rather strongly curved boards as Lumia 620 and change a little bit in the camera design. 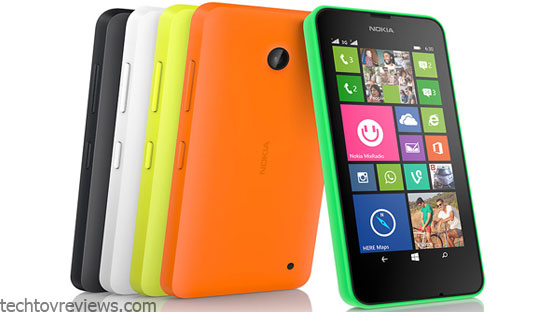 Nokia Lumia 630 is the first device to use virtual navigation keys on the display, while the previous versions of Lumia phones has three navigation buttons located on the bottom of the screen. This is also the first time the camera button is no longer available at the right side of the Lumia. You can quickly access the camera application as a shortcut on the screen. The left side is also completely empty.

In terms of size, the Lumia 630 is 9.2mm thick, not much thin on the Lumia smartphone segment, but its comfortable and easy to hold in hands.

Microsoft’s new Lumia 630 is favored to become the first smartphone running on Windows 8.1 has many new improvements, most supplements the shortcomings of previous operating systems. The new improvements like Customize the color, size and number of Live Tiles, Background image for the Start screen. Moreover, instead of using the underlying platform, Windows 8.1 expressions show up on every Tiles wallpaper, adding color and lively personality to the screen. 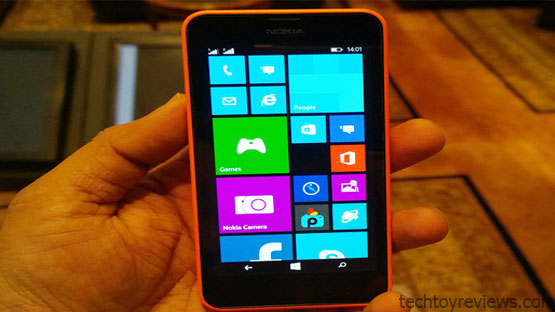 The keyboard also very quick, fingers run over the keyboard to quickly by using Swype action while chatting with friends. Connect Miracast help transmit data directly to other devices using Wi-Fi connection, such as a TV. Press and hold the button back to the list of running applications in the background, click on the application to activate and drop down the application below to shut down completely.

IPS LCD screen technology is integrated for better visibility under sunlight, black and white are shown the deep, clear, and energy-saving capability with wide viewing angles. 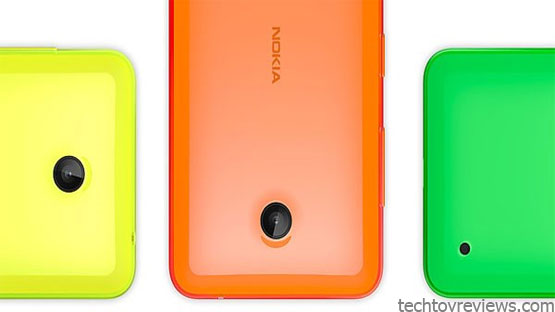 The Lumia 630 is sporting a 5 mega-pixel camera, integrated communication features such as touch focus, autofocus, video capture, panorama etc, but no flash support, is somewhat difficult to use in lower lighting conditions.
Nut with this 5MP camera, you still get sharp photos and movies with 720p HD quality. It doesn’t have a front camera. This will upset users who regularly make a video call with friends and relatives.

Lumia 630 running on 512MB of RAM and either 1.2GHz quad-core processor, Snapdragon 400 chip configuration is also not known too strong. Fortunately, Microsoft has improved performance significantly on the Windows 8.1 devices, so you can surf the web, listen to music, watch HD movies and play the game smoothly.

Although still limited in configuration, but Nokia Lumia 630 supports external memory up to 128GB, an impressive figure that there is rarely any smartphone, you always have enough space for all your favorite applications, photos, music and other important data. The phone also comes with internal memory of 8GB.

Thanks to running the new version of Windows Phone, the Lumia 630 device will be the line dual SIM smart phone, supports virtual SIM switch key enables the SIM switch easier. Now, you can enable call waiting and call forwarding between two SIM, its make call bill and social connections easier than ever. 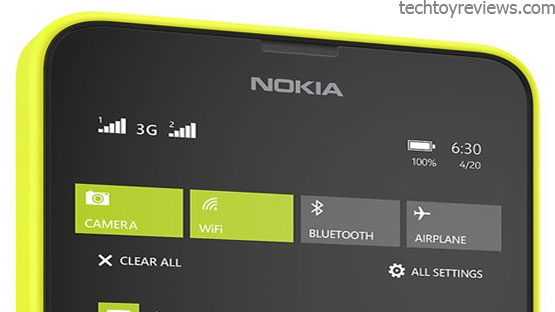 The Lumia 630 comes with 1830mAh removable battery, which is certainly better than the Nokia Lumia 620 which has 1300mAh battery. Nokia also confirmed that the Lumia 630 could last more than 16 hours in 2G mode and 13 hours for 3G. The batteries run out in 9 hours on Wi-Fi,  Video playback time up to 7 hours, is the time for you to see movies with high quality on this phone.

He started this blog as a hobby to show his affection for gadgets, but over the time this hobby became professional. And now he is working as a full-time blogger, but in free time he loves watching movies and games. PayPal donation for TechToyReviews will be appreciated.
@https://twitter.com/Techtoynews
Previous Apple WatchKit Launched for Development
Next Fuji X100T Super viewfinder 16mp Camera