Microsoft has officially launched the Lumia 535, a mid-range smartphone and is the first Lumia phone without brand Nokia. Lumia 535 has two highlights include 5-inch display and 5 mega-pixels front camera. According to Microsoft, this is their version is designed to succeed the Lumia 530 and mainly aimed at markets such as China, India, Russia and other Asian countries. In the future, Microsoft also will sell the Lumia 535 in Europe, but the company has not announced a specific timeline. 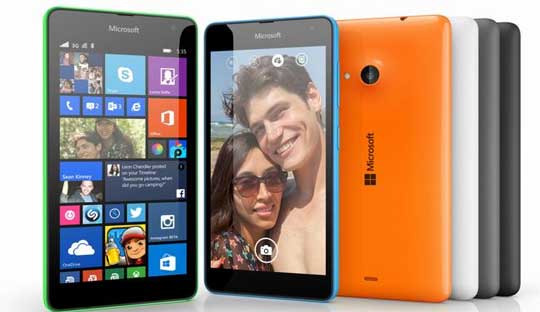 The design of the Lumia 535 retains the same features of the Lumia line, with rounded edges, soft plastic back cover with smooth surface. The buttons are located right above the volume keys and the power button at the bottom.

Microsoft Lumia 535 has AMOLED display, but for budget segment due to a resolution of 960×540 pixels. The Microsoft focused on display content visibility under heavy sunlight for the Lumia 535. It has a 5 mega-pixels front camera wide angle lens with a focal length of 24mm same as the Lumia 730-735. With this camera parameters, the Lumia 535 promises to be an ideal mid-range smartphone for selfie photography. Meanwhile, the rear camera also comes with a 5 mega-pixels but with LED flash.

Lumia 535 is equipped with a Qualcomm Snapdragon 200 chip, 1.2GHz quad-core processor, 1GB of RAM, 1905 mAh battery. The phone has 8GB of internal storage and microSD card support up to 128GB. Like the previous Lumia, 535 have a wide choice of colors such as green, cyan, orange, black, and white. The back cover of the phone also removable and Microsoft also sold various colored back cover.

Microsoft said the Lumia 535 will be available later this month at the Asia-Pacific region in which the company will give priority to market Russia, India, China. The phone will be sold in Africa and Europe, but later. Microsoft’s Lumia 535 official selling price for the Lumia 535 announced $135-approximately 8,308 INR, but the price can be different in various markets.

He started this blog as a hobby to show his affection for gadgets, but over the time this hobby became professional. And now he is working as a full-time blogger, but in free time he loves watching movies and games. PayPal donation for TechToyReviews will be appreciated.
@https://twitter.com/Techtoynews
Previous Xolo Q1020 Smartphone with impressive wooden design
Next LG AKA officially launched at Korea