At the press conference took place last night at MWC 2015, in addition to HTC One M9 smartphone and smart bracelets called HTC Grip, HTC also introduced the other product that is HTC Vive virtual reality glasses. Vive is the first virtual reality glasses for HTC, manufacturers from Taiwan has partnered with Valve – game developers, to make this product. At first glance, it looks very similar to the Samsung Gear VR.

Unlike other virtual reality glasses uses the phone screen to view, HTC Vive to stream content from our computer directly to your wireless glasses, so this is a virtual reality glasses for PC. Unfortunately, this computer VR Glasses will be available for customers to the end of the year. According to HTC, Vive will be a very light weight device so we could wear for long periods without getting tired. Moreover, the device uses more than 70 sensors, providing a full 360-degree viewing angle for image scanning speed reaches 90fps for better visual experience. Even more impressive, HTC Vive has two screens, and each screen has a resolution of 1200 x 1080 pixels, a resolution is very high compared to the VR device.

HTC Vive creates an exciting opportunity for all developers and content creators, it gives the value of virtual reality with a complete solution – redefining the way of Entertainment, interact, learn and do things become more efficient, said a representative of HTC. 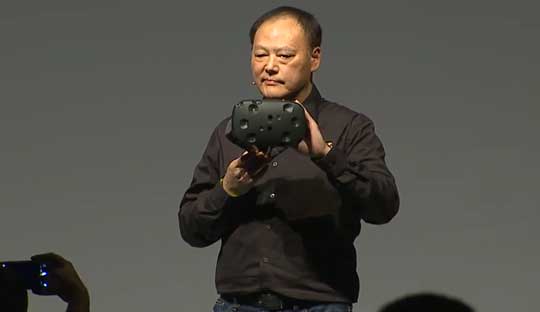 HTC Vive commonly used Valve SteamVR platform will be launched in the near future, it is extremely suitable for the transmission of the content of the game, especially support SteamVR game by Valve to promote. HTC Vive integrated gyrosensor, accelerometer, and laser position sensor. The trio sensor will measure the movement of our head very accurately, up to 1/10 degrees. This feature ensures that the image will be changed accurate and easier, and it can be combined with one to another track, create a virtual reality experience more real.

HTC does not introduce many of the features of Vive, but they vowed to cooperate with a number of leading content developers like Vertigo Games, Bossa, dovetail Games, Wemo Labs and Owlchemy. Besides, Google, HBO, Lionsgate, and the National Palace Museum in Taiwan will be the content provider for HTC Vive virtual gaming glasses.

HTC Vive has a wireless joystick for both hands for us to interact with objects in the virtual reality world and sound quality is also very promising.

He started this blog as a hobby to show his affection for gadgets, but over the time this hobby became professional. And now he is working as a full-time blogger, but in free time he loves watching movies and games. PayPal donation for TechToyReviews will be appreciated.
@https://twitter.com/Techtoynews
Previous Lenovo A7000 smartphone with Dolby Atmos sound Launched at MWC 2015
Next Acer Liquid Leap+: First multiple OS wearable Launched at MWC 2015