We have a highly Rugged Smartphone in front of you today, Blackview is one of the famous Chinese smartphone manufacturer which creates lots of Flagship, mid-range and budget smartphones; along with the Blackview BV5000 which was launched last year and also water/dustproof phone, resistant to starches and dents. Now they have released a new upgraded version of BV5000 rugged phone named Blackview BV6000 and we believe it to be the trend followed by Blackview which handled the waterproof, dustproof, withstand bumps and scrapes and as per the looks of this Blackview Smartphone you can see the degree of robustness this phone carries. 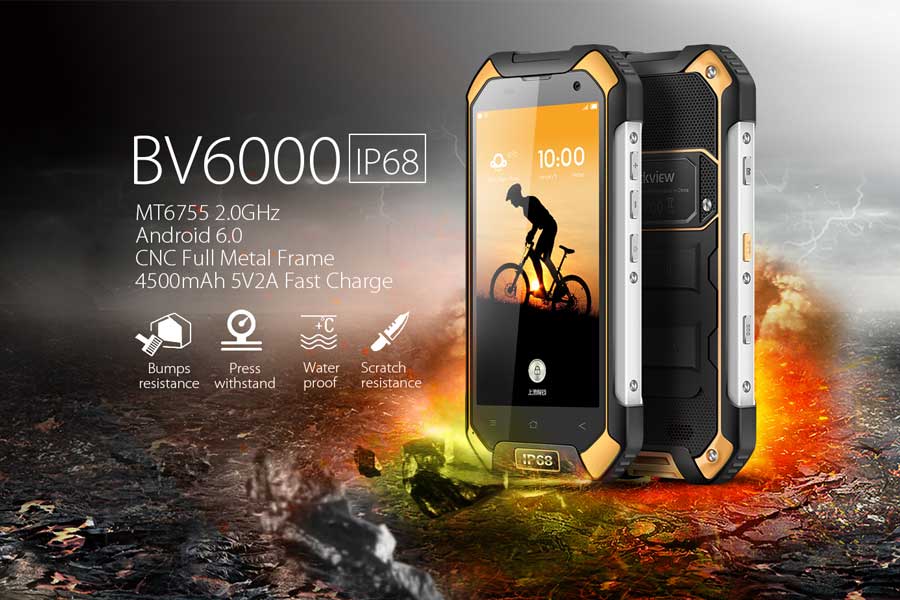 Blackview BV6000, which the Chinese manufacturer claims to be one of the strongest outdoor and underwater Rugged phone in the market, is available for pre-order on GearBest for $219.99 USD. The BV6000 is 16.6 mm thick and is covered with Gorilla Glass 3 screen on the front and in Blackview’s own words, the textured polycarbonate plus glass fiber back with excellent spungy effect protecting the device from serious bump. On the side edges, a strong CNC metal frame will guard BV6000 against accidental falls also resitance to bumps and scratches.

Given the aforementioned information on Blackview Cell Phones official site, you can probably figure out that the IP68 rating given to the BV6000 is fairly strong – similar to Galaxy S7 Samsung Rugged Phones. While this means that the phone is completely dust resistant, and also protected from immersion in water.

Apart from being IP68 certified dust-proof and water-proof it also features Atmosphare Pressure Sensor helps to calculate the elevation of a mountain via measuring atmosphare pressure. It can handle the impact when falling from the height, which is something exceptional.

The Blackview BV6000 features 4.7-inch HD (720 x 1280 pixel) resolution display and powered by the 64-bit MediaTek MT6755 chipset is accompanies a faster clock rate of 2.0 GHz. It also comes with a powerful Mali-T860 GPU along with 3GB of RAM and 32GB of inbuilt storage which can be further expanded via microSD card up to 32GB.

On the camera front, this Blackview Phone flaunts a 13-megapixel autofocus primary camera with f/2.0 aperture and LED flash. It can shoot HD videos at 30 frames per second. There is a 5-megapixel front-facing camera with 85 degree wide angle lens to capture wide group selfie.

He started this blog as a hobby to show his affection for gadgets, but over the time this hobby became professional. And now he is working as a full-time blogger, but in free time he loves watching movies and games. PayPal donation for TechToyReviews will be appreciated.
@https://twitter.com/Techtoynews
Previous Lava A72 Price, Specifications and Availability
Next Canon EF-M 28mm f/3.5 Macro IS STM Lens for Macro Photography Launched at $299