Galaxy Tab Active is not same as All Samsung Tablets, It is the first tablet of its resistance to water and dust, IP56 certified. However, unlike a waterproof tablet on the market for all types of customers, the Galaxy Tab Active is object oriented for business users. Samsung launched this tablet to aimed at users in environments with high humidity, outdoor, low temperatures and dust. 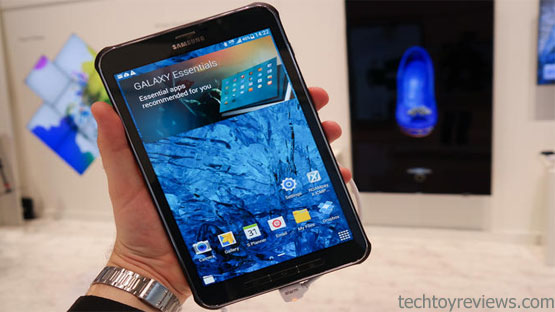 Galaxy Tab Active with rugged and water resistant to IP67 for outdoor work. This Samsung Active Tablet is aimed at businesses and entrepreneurs wishing to use the tablet in the harsh environment through the design was solid, maneuverable. The Tab Active has similar design as Galaxy S5. Tab Active is equipped with shock-resistant coating. This coating Tab Active can stand of any impact when dropped from a height of 1.2 m.

Galaxy Tab Active has an aggressive design with hard rubber body, so the tablet can stand with multiple drops to 1.2 meters high, water and dust resistant. You can see this Samsung Active Tablet is based on the hardware of the Galaxy Tab 8.0 was released before. This tablet is integrated with a KNOX security program to protect the data of maximum user to meet the needs of the business. Speaking about the special features in this tablet line, the Samsung Active Tablet has an aggressive design with rubber coating. Actually, Samsung wants to navigate to the durability of the device as it will work well in environments with high humidity, or outdoors if rain, low temperatures and dust.

To supplement use, Samsung also includes a Pen. During some work such as engineers, workers wear thick gloves in hands, the pen will be very useful. Besides battery life of the tablet is also optimized with the ability to use almost continuously for 10 hours. Battery quick detachable back cover open, separate charging port alongside microUSB port.

It also owns 3.1MP camera with capabilities of autofocus, flash and a front camera of 1.2 MP. With the unique features of this Samsung Active Tablet so it can be difficult to be distributed to consumers through often. Samsung Tab Active also has the option of Wi-Fi and LTE + Wi-Fi 4GB

Currently, Samsung Tablets has not announced the price point as well as the Galaxy Tab Active will be available on the market.

He started this blog as a hobby to show his affection for gadgets, but over the time this hobby became professional. And now he is working as a full-time blogger, but in free time he loves watching movies and games. PayPal donation for TechToyReviews will be appreciated.
@https://twitter.com/Techtoynews
Previous LINE App with Line Selfie Sticker to turn yourself in to Sticker
Next Angry Birds Transformers with new concept for Android and iOS