Recently we heard the news about Acer Liquid Z500 and Acer Liquid Jade S smartphone, Now the present time has appeared a lot of information about the new Acer Smartphone devices called Acer Liquid Z410 with 4G LTE and good price only € 129. 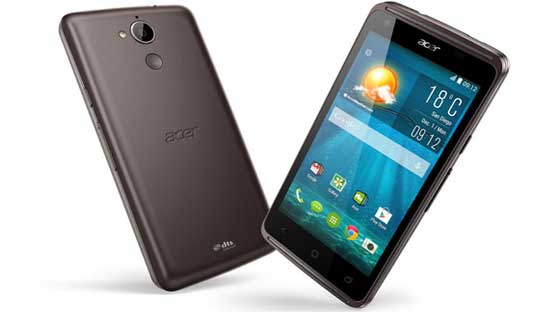 Not only a good price, Liquid Z410 also has better hardware specifications such as qHD 4.5-inch display with a resolution of 960×540 pixels, pixel density of 245 ppi, 64-bit quad-core processor with MediaTek MT6732 and Mali T760 graphics chip. It has a 5 megapixel camera on the back with LED flash and 2 megapixel front camera for selfie. Both cameras are able to voice commands and supports the 4G LTE network.

Although the cheap smartphone, but Acer Liquid Z410 is equipped with advanced features including AcerRAPID allows users to access what you need at a single touch, Acer QuickTouch helps you control your smartphone with one hand, AcerEXTEND allows you to control the smartphone connected via wired or wireless, and many other features. The phone is also equipped with DTS Studio Sound Technology and a battery that Acer could say 5.5 hours talk time, standby time up to 400 hours.

The Acer Liquid Z410 price 129 Euro in Europe, expected price index is similar to the $129 – approximately 8,172 rupees and will be officially announced at CES 2015, products will be sold only in Europe, Middle East and Africa and is scheduled in the market for the end of February.

He started this blog as a hobby to show his affection for gadgets, but over the time this hobby became professional. And now he is working as a full-time blogger, but in free time he loves watching movies and games. PayPal donation for TechToyReviews will be appreciated.
@https://twitter.com/Techtoynews
Previous LG G Flex 2 real image revealed before the announcement at CES 2015
Next The Ring with ability to control Smartphones at CES 2015