As expected the Sony Xperia E3 was finally officially announced the event ahead of IFA Berlin 2014. Still adhere to cycle every 6 months to launch such a top smartphone before. Sony announced a mid-range smartphone Sony E3. 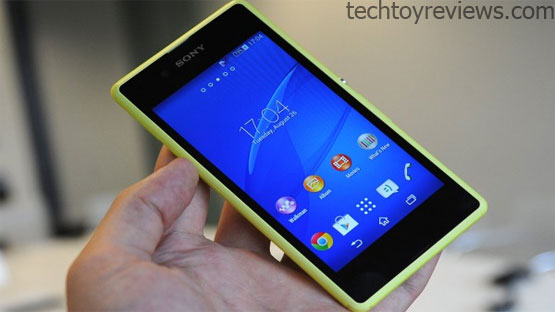 Supposedly the new launch, but Sony did not forget for a space to launch a smartphone in the their new midrange segment is the Sony Xperia E3. This smartphone is equipped with the perfect configuration of a mid-range device. It has a 4.5-inch screen resolution of 480×854, the phone uses 1.2GHz quad-core chip with Adreno 305 graphics and 1GB of RAM. It has a 5MP rear camera and 1.3 MP front camera suitable for those wishing to take a selfie picture. Besides, the smartphone is also equipped with the quite high battery capacity compared to other smartphones in the same segment as 2.330mAh, with this battery we absolutely have enough in 1 day with normal tasks. In addition to two classic black and white colors, E3 will be special favor with an exclusive yellow version.

Inherently midrange smartphone, Xperia E3 equipped Snapdragon 1.2 GHz quad-core CPU with 1 GB RAM. This is the Powerful hardware for smartphones like Xperia E3, stability can launch the application and 3D gaming experience is quite good.

It has 5.0-megapixel camera with flash support with many different shooting modes help, the user can easily select appropriate conditions. Besides, Xperia E3 accompanies the interesting photo editing application and sharing tools on the social networking site quickly via wifi and also 4G supports. Another special feature is the ability to record full HD 1080p videos with very high quality.

The battery life of the Xperia E3, according to the manufacturer’s published an impressive talk time of up to 12 hours and standby time of 700 hours despite owning only 2330 mAh capacity battery, which can be explained by the small screen size and low power consumption savings of energy efficient Kitkat 4.4 operating system.

Xperia E3 smart phones is a good price, pretty nice design with hardware stability. These things, along with came from a renowned manufacturer already confirmed his name, predicted that the Xperia E3 has a stable position on the market in the near future.

This one is absolutely cheap smartphone, does not mean it has a poor quality, Sony has demonstrated Sony E3 at IFA 2014. Bringing stylish design of the Sony Xperia Z3, but the edges of E3 just plastic rather not metal, and the configuration of the much lower,  of course waterproof feature does not appear on the phone. Strengths of E3 is that it brings 4G support.

He started this blog as a hobby to show his affection for gadgets, but over the time this hobby became professional. And now he is working as a full-time blogger, but in free time he loves watching movies and games. PayPal donation for TechToyReviews will be appreciated.
@https://twitter.com/Techtoynews
Previous OPPO R5 World record break 4.85mm thin Smartphone
Next LINE App with Line Selfie Sticker to turn yourself in to Sticker