Today, 29-10 Oppo has held events launched its two new smartphone devices are the Oppo N3 and Oppo R5 at Singapore. Oppo is currently a brand is making rapid strides in the Indian market, hoping their new smartphone will conquer the users and compete with the likes of the iPhone, Sony, Samsung, LG etc.

Gionee Elife S5.1 is currently holding the record as the thinnest smartphone coming this afternoon, but had to cede to the Oppo R5. The new smartphone of OPPO only 4.85mm thick and similar design as Oppo R1, but thinner and lighter. 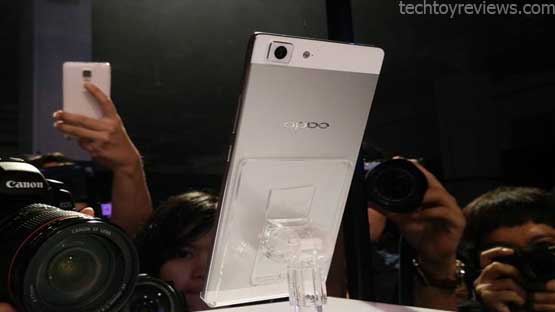 According to information from the online store oppomart.com announced its smartphone is called Oppo R5 with an ultra slim design with the size of 4.85mm and powerful configuration. Regarding specs, the Oppo R5 will own HD 5.5-inch screen, 720p resolution, running 64-bit processor, Snapdragon 615 chipset from Qualcomm, 2.1GHz+1.5GHz quad-core with 3GB RAM, 32GB of internal memory which is not expandable.

The Oppo R5 world thinnest smartphone with a thickness of only 4.85mm, separate aluminum frame design only 4mm thin and this is the thinnest smartphone in the world. It also uses vooc technology battery charger can charge from 75% within 30 minutes. OPPO R5 also uses Liquid Metal technology can help your phone to heat and save your battery efficiently.

The back panel will be equipped with 13 megapixel camera sensor from Sony and 5 megapixel front camera. Also Oppo R5 owns fast charging, charging up to 75% in just 30 minutes, and running on the basis of the Color OS.

In addition, as announced by the price of Oppo R5 around $499 to Find 7a prices currently on the market.

He started this blog as a hobby to show his affection for gadgets, but over the time this hobby became professional. And now he is working as a full-time blogger, but in free time he loves watching movies and games. PayPal donation for TechToyReviews will be appreciated.
@https://twitter.com/Techtoynews
Previous OPPO N3 launched with 16MP Swivel camera and Snapdragon 801 Processor
Next Xperia E3 cheap smartphone only Rs. 10,000