The battle in the smartphone market is becoming increasingly fierce, with the participation of as so many names come from the National wide. 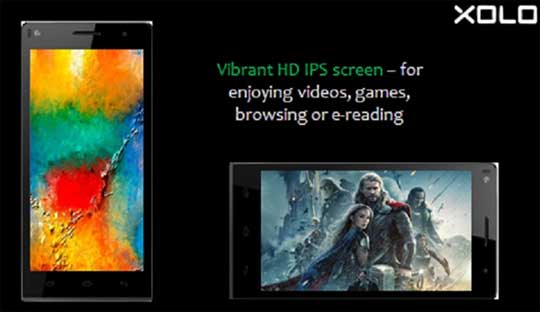 The Xolo Mobile Company did not intend to stay out of the game, Xolo latest name to release a phone called Xolo Play 8X-1020, this news is provided by the Mahesh Telecom on their Facebook page with Specs and details. This new smartphone is listed online and price tag of rupees 9,700.

The Xolo Play 8X-1020 will own 1.4GHz Octa core processor, MT6592M SoC with Mali 450 GPU. It has 1GB of RAM and 8 GB of internal memory, also can be expandable via microSD card up to 32GB. A device using Android 4.4 Kitkat OS with Xolo Hive UI interface which is promising a new mind blowing interface on Android smartphone running today.

The Xolo Play 8x-1020 comes with 5 inch HD display with an IPS panel, a resolution of 1280×720 pixels. It has a 8 megapixels rear camera with dual LED flash and Exmor R sensor, you can also shoot Full HD videos up to 1080 pixels. It also has a front camera of 5 megapixels also has LED flash too, so clicks selfies without any fear.

This Xolo Mobile Phone has a Dual SIM card slot and own 2,500mAh battery capacity, which is good for one day use, in terms of connectivity the phone include 2G, 3G, Wi-Fi, Bluetooth 4.0, GPS / AGPS. This Xolo Play 8x-1020 phone available at online web store.

The Xolo Q700 Club owns a 4.5-inch display, MediaTek MT6582M quad-core processor, 1GB RAM with internal memory of 8 GB which is also expandable up to 32GB. It has a rear camera of 5 megapixel and the front camera of 0.3 megapixels. This one is also a Dual SIM phone with 3G network and this Xolo Mobile Phone Price only Rs. 6,999.

He started this blog as a hobby to show his affection for gadgets, but over the time this hobby became professional. And now he is working as a full-time blogger, but in free time he loves watching movies and games. PayPal donation for TechToyReviews will be appreciated.
@https://twitter.com/Techtoynews
Previous HP Pro Tablet 408 G1 with Stylus Pen and 2GB RAM
Next HP launched HP Stream 8 Windows Tablet with Intel chip at just Rs. 16,990