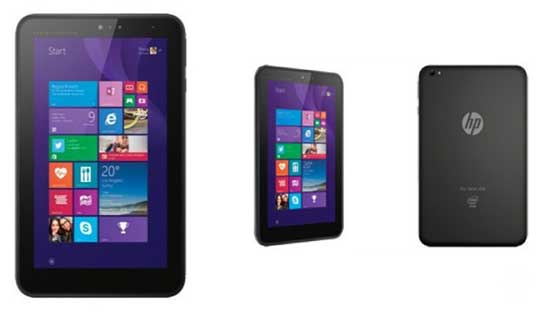 This tablet possesses HD touch screen display of 8 inches, use IPS technology, a resolution of 1280×800 pixels and supports up to 10 point multitouch. The processor is Intel’s model: Intel Atom Z3736F Bay Trail. Clock speed is 1,33GHz and up to 2.16GHz with Intel Burst Technology. 2GB of RAM and Intel HD graphics with two options for internal storage such as 32GB or 64GB of memory. Additionally, the microSDXC memory card format also supports up to 128GB.

In addition to the factors mentioned above, HP Pro Tablet 408 G1 is also comes with an 8 megapixels camera on the back with flash and a 2 megapixels front camera, stereo speakers with nice sound quality. For Connectivity the HP Windows Pro Tablet support 3G SIM card slot, Wi-Fi, GPS, A-GPS, Bluetooth 4.0, GLONASS, Micro-USB, and Micro-HDMI.

Dimensions of device are 140 x 215 x 9mm, weight only 375gram. Currently, this HP Windows 8 Pro tablet has not officially been announced. Form of sale and the sale price has not been disclosed.

He started this blog as a hobby to show his affection for gadgets, but over the time this hobby became professional. And now he is working as a full-time blogger, but in free time he loves watching movies and games. PayPal donation for TechToyReviews will be appreciated.
@https://twitter.com/Techtoynews
Previous Xolo Q700 Club: First water-resistant phone from Xolo Mobile
Next Xolo Play 8X-1020 with 5″ display and Octa-core Soc only in Rs. 9,700