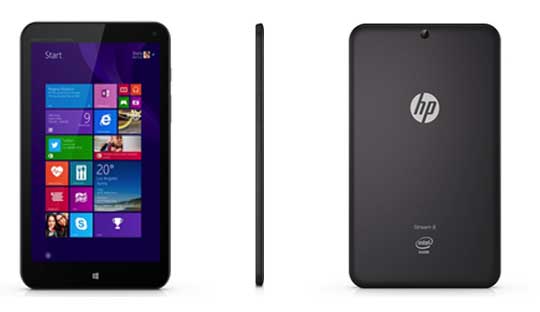 On his official website, HP said that HP Stream 8 is the leading tablet for you to work anywhere in the 3G network, the power of the Intel chip with the support of the Office toolkit and Office 365 on the Windows 8.1 platform.

Running Windows 8.1 OS, HP Stream 8 has a quite slim design, thickness of 124x209x8.9mm and its weight around 388 grams. The tablet also owns a 5 megapixel rear camera, but without flash, and a front camera of 2 megapixel for video calling and click selfies.

HP Stream 8 enabled with a 4000 mAh battery which is perfect for 3G Connectivity, Wi-Fi, GPS/ A-GPS, Bluetooth 4.0, GLONASS, and Micro-USB. HP Stream 8 will be available at the online store in 16,990 rupees.

He started this blog as a hobby to show his affection for gadgets, but over the time this hobby became professional. And now he is working as a full-time blogger, but in free time he loves watching movies and games. PayPal donation for TechToyReviews will be appreciated.
@https://twitter.com/Techtoynews
Previous Xolo Play 8X-1020 with 5″ display and Octa-core Soc only in Rs. 9,700
Next Most expected Smartphones will announced at CES 2015