Xiaomi is planning to launch a new product called Xiaomi Mi Note Plus uses the latest processor from Qualcomm. Recently, the information on this product has officially leaked on Geekbench, at the time, an image of the Xiaomi Phone screen – which also confirms the model name has emerged in China.

Recently Xiaomi has launched the Mi Note and Mi Note Pro smartphones, the Chinese company Xiaomi, probably soon release another device. Incidentally, the device will be in the same range as that of the aforementioned device. Most likely Xiaomi Mi Note Plus will be the new product line. Accordingly, Mi Note Plus will own the same style and design like its predecessor, but with a smaller screen size and own 64-bit Octa-core Qualcomm Snapdragon 810 processor.

The Xiaomi Mi Note Plus is also equipped with a Adreno 430 GPU, 4GB RAM, 13 megapixel rear camera and screen 2k resolution of 1440×2560 pixel like on Mi Note Pro, and the diagonal is probably 5.7 inches. The phone runs on latest Android 5.0.2 Lollipop platform. Most likely Mi Note Plus will be sold in some specific markets, this device has almost same configuration compared to the Xiaomi Mi Note Pro. 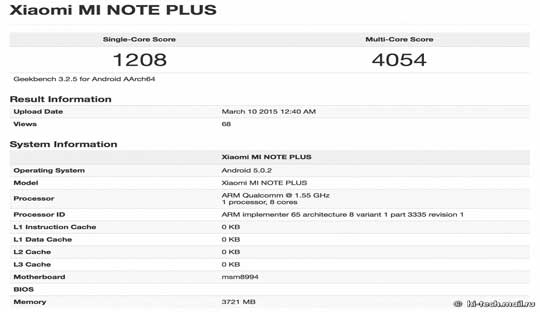 However, we do not have any data on the design of the device so that it is impossible to judge whether the new smartphone is similar to the Xiaomi Mi Note Pro. As you already know, the Mi Note and Mi Note Pro is available only in China with a price tag of $ 530, we expect that Xiaomi Mi Note Plus will cost a little less and will be available in markets outside of China.

Meanwhile, the manufacturer has recently announced the new Xiaomi Mi Note Bamboo Edition, as the name implies, the back side of the device is covered with bamboo case.

He started this blog as a hobby to show his affection for gadgets, but over the time this hobby became professional. And now he is working as a full-time blogger, but in free time he loves watching movies and games. PayPal donation for TechToyReviews will be appreciated.
@https://twitter.com/Techtoynews
Previous Samsung Galaxy Tab A Specs and Prices
Next Minimum requirements to run Windows 10 on Smartphones, Tablets and PCs