Since the Xiaomi company introduced the Xiaomi Mi 4 phone is pretty much flow of information about this smartphone on the technology websites. The image of the Xiaomi Mi4 shows us clearly, the Mi4 has the same design as the iPhone 5S, but it has a 5.5 inch display. In fact, MI 4 smartphone hardware is really reliable.

Strengths of the Xiaomi Mi4 is its price point. The Xiaomi Mi 4 price is pretty good compared with the hardware configuration of the device. The Mi4 has bold design, this smartphone is considered the iPhone design style. The case material is metal frame of stainless steel. Xiaomi 4 published price of 320 USD to 400 USD for 16 GB and 64 GB version, but any conformation about Xiaomi MI 4 Release Date. 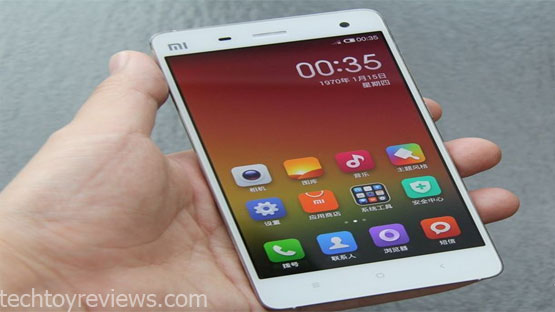 The Mi4  best cheap smartphone in China and also attracts customers, the black version of this phone is almost very popular there.

Xiaomi Mi4, 5.5 inch display is very Sharp, Full-HD resolution of 1920×1080 pixels and pixel density of 441 ppi. The image displayed on the screen of Mi4 pretty sharp with high contrast.

Mi4 equipped with 8 MP front camera and back has 13 MP camera with LED flash. Xiaomi Mi 4 Modular design can not open the back cover.

Xiaomi Mi4 is quite nice design, back has pretty pattern but not slippery when held in hand. Certainly case design with stainless steel, Xiaomi is quite aesthetic in terms of fashion.

The highlights of the Mi4 is not only its configure but also the price and designing too good. The style of this phone like the iPhone 6, but the important part is product quality.

The touch screen is very responsive of Mi4, 10 touch points simultaneously. Even if you wear gloves can still feeling the touch screen.

On the hardware configuration of the Xiaomi Mi4 is equipped with microprocessor of Snapdragon CPU 801, which is pretty powerful. 2.5 GHz quad core 400 Krait performance also increased the 14% higher level to handle multiple tasks at the same time. DSP core ultra-low power consumption, save energy when watching movies, surfing the web and playing games. Also, Mi4 use the Adreno 330 graphics processors, graphics processing is quite fast with API & FlexRender with 3GB of RAM to help speed processing faster in 3D graphics.

He started this blog as a hobby to show his affection for gadgets, but over the time this hobby became professional. And now he is working as a full-time blogger, but in free time he loves watching movies and games. PayPal donation for TechToyReviews will be appreciated.
@https://twitter.com/Techtoynews
Previous Gionee ELIFE S5.5 – World Slimmest Phone
Next Apple Watch : First look