Gionee ELIFE S5.5 appear as the brightest and slimmest phone at the MWC 2014, attracted the attention of technology lovers. The phone is 50%  thinner than Galaxy S5, the world’s Slimmest phone brings exciting experience for users with excellent design and powerful hardware. 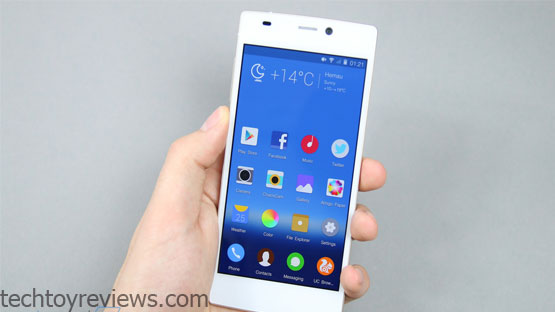 Gionee ELIFE is fully equipped with 3G connectivity, WiFi, WiFi Hotspot, Bluetooth, GPS / A-GPS. The battery capacity is 2300 mAh, equivalent HTC One, and much higher than the iPhone 5S, so you can be assured to use features without worrying about battery life.

The high-level design of sturdy metal frame, while the two sides of the glass are Corning Gorilla Glass, has a strong impact, scratch resistant. The combination of this material is truly unique, new look brings luxury and elegance. The back of the Gionee phone fitted with camera, speakerphone and bottom of the logo Gionee placed along the middle. This ingenious design of Gionee is guaranteed not affect its thinness.

Although only 5.5mm thin, 50% thinner than the Galaxy S5, puts ELIFE S5.5 become the world’s slimmest smartphone today. Even so, you  still have the feeling of holding your hands firmly by the metal frame. Liner aluminum frame certainly helps device in your hands, while the back side glass helps to cool engine with comfortable.

The Gionee ELIFE S5.5 smartphone is quite a light screen size of 5 inches, Super AMOLED technology, with 3-touch navigation keys. The screen shows HD 1080x1920px resolution. In this bright colors, vivid, and sharp display, you can read the news, browse the web for hours with no eyestrain. The high-end games like FIFA 14, Asphalt 8 or Fighting Tiger also be able to play without any lag and perfect.

Gionee India said the name ELIFE S5.5 is set for the product to create a special impression, highlighting the most important features that bring the new slimmest phone to users. It is surprising just 5.5mm thin.

Besides, the Super AMOLED screen is integrated on the Gionee ELIFE also brings many surprises for users. ELIFE S5.5 smartphone surprised us with its thinness and powerful hardware and performance, Gionee S5 is much improved and powerful for satisfying users. Again, Gionee phones emerging  scored well with today’s smartphone users, deserves a good choice is a tradeoff between the hit series smartphones.

He started this blog as a hobby to show his affection for gadgets, but over the time this hobby became professional. And now he is working as a full-time blogger, but in free time he loves watching movies and games. PayPal donation for TechToyReviews will be appreciated.
@https://twitter.com/Techtoynews
Previous LG G3 Full review – Redefined smartphone
Next Xiaomi Mi 4 – Cheap Smartphone with Powerful configuration