Windows 10: Free upgrade in the first year for the Windows 7, 8 and Windows Phone 8.1

Microsoft has announced the new Windows 10 operating system will as a free upgrade in the first year for users of Windows 7, Windows 8 and Windows Phone 8.1. 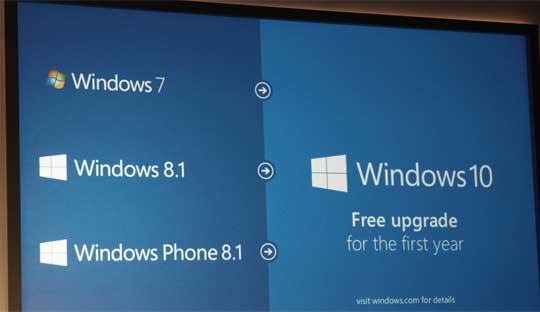 Previously, Microsoft sells Windows versions with different prices depending on the purpose of use. In the ongoing rollout, Microsoft said they now see as a Windows internet service – continued updates. For clearly, the free upgrade for the first year during the first 1 year from the date of Microsoft Windows 10 was launched, you are free to upgrade it if you are using Windows 7 and 8.1 for PC and free for Windows Phone 8.1 users are on the phone. Just activate this time, then we can use a lifetime contract without paying any fee. Only after a period of 1 year before the break, which you pay when you want to upgrade to Windows 10.

He started this blog as a hobby to show his affection for gadgets, but over the time this hobby became professional. And now he is working as a full-time blogger, but in free time he loves watching movies and games. PayPal donation for TechToyReviews will be appreciated.
@https://twitter.com/Techtoynews
Previous Microsoft Hololens: A virtual reality glasses running Windows 10
Next Samsung NX500 Picture and Specs Leaked