S Pen stylus of the Samsung Galaxy Note line is already very popular among Samsung users. Yet the S Pen stylus is not up to the mark today, Samsung has officially introduced to the new Samsung Advanced S Pen with outstanding features for next generation users.

Today is big smartphones like Phablet are become the style statement of many people. The Korean manufacturer is now the undisputed leader in technology development with this Advanced S Pen.

The Samsung Advanced S Pen, released Samsung official conference being held in San – Francisco-USA. The Advanced S Pen is a highly sensitive than the current version of the S Pen which is designed for Galaxy Note 4. In addition, the Samsung Advanced S Pen has the ability to identify and analyze the writing speed, tilt font, rotation, also equipped with advanced text editing features and handwriting recognition is very good. 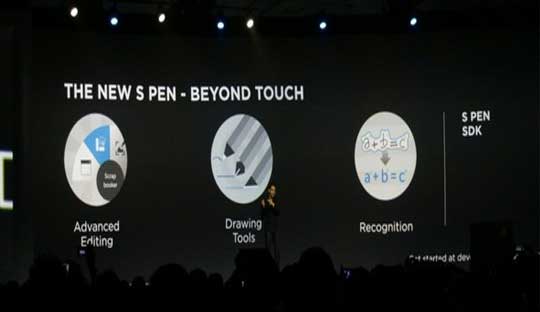 Samsung Advanced S Pen will be compatible with both Samsung Galaxy Note 4 and Galaxy Note Edge, and the carrier will also update the S Pen SDK to introduce programmers can exploit better. So could see Note line is carefully cared firm, appreciate when continually launching accessory products for their users to feel a better experience to use on Note devices.

Samsung company is a leader in the development, involving the use of smartphones or a Samsung Galaxy Pen. Now the Samsung Advanced S Pen is brought to another level of its Galaxy line. Currently there is not any information on the retail sale price and official release date of this Samsung Advanced S Pen.

Galaxy Note S Pen is a still is a super high-end device with Samsung’s latest technology. Thus the results of the poll showed that more than 55% of voters do not think they will buy new Samsung Advanced S Pen for Note 4, while 44% will buy this pen. Of course, in reality, people actually buy Galaxy Note 4 would still love to get this Advanced S Pen.

He started this blog as a hobby to show his affection for gadgets, but over the time this hobby became professional. And now he is working as a full-time blogger, but in free time he loves watching movies and games. PayPal donation for TechToyReviews will be appreciated.
@https://twitter.com/Techtoynews
Previous BlackBerry Classic open orders price $449
Next Yoga 3 Pro laptop launched by Lenovo with Intel HD5300