Today Pebble officially launched their latest product called Pebble Time. This is still a smart meter, but compared to the previous generation Pebbles Smart Watch, the biggest improvements are in color e-paper display with 64 colors, not black and white display anymore. 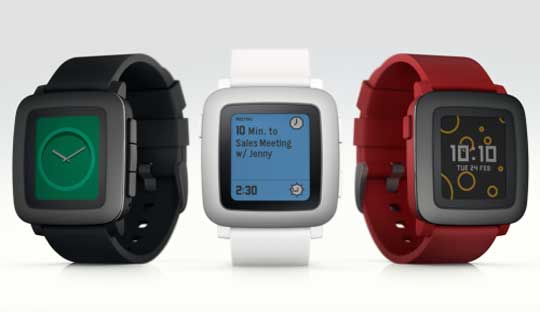 Pebble manufacturer says that compared to LCD or OLED technology, Pebble Time consume very low power, so its battery life of up to 7 days, before the advent of the Pebble. Since now screen size is unknown, but it is larger than its predecessor. One of the main Pebble Smartwatch features is that additional microphone to allow you to reply to messages and other communications by voice. On Android, this feature runs for most of the apps such as SMS, Hangouts, Gmail, Facebook Messenger, WhatsApp etc, even with the current iOS answering voice restricted in Gmail. Pebble still actively working to expand this feature.

In terms of design, Pebble Time is only 9.5mm thin, 20% thinner than the first Pebble Smart meter. The Watch also be slightly bent at the waist to fit the natural structure of the body. The glass is scratch-resistant with a Gorilla Glass layer, stainless steel rim wrapped around the device. The Pebble Time is water resistant, so you can comfortably wear it while swimming. Users have three color options: red, black and white. The Pebble has built a completely new interface in the form of timeline do you view all your communication more easily. You can scroll up and down to view the notifications as well as the weather forecast, calendar, reminder etc. Currently there is no any information about this new timeline interface will be updated to Pebble Watch and Pebble Steel Smart Watch.

The Pebble Time is used 22mm standard silicone fiber band, however, the band produced by the Pebble there are stunning features included small pin on both sides of the band, so users can easily assemble the band. Pebble Time is compatible with both iOS and Android via Bluetooth. The Smart meter can run more than 6500 apps specifically designed for Pebble.

Currently Pebble continues to raise funds and have received money nearly $ 1 million, while to achieve goal they only need $ 500,000. The fundraising campaign continues more 31 days, and this is your chance to buy Pebble Time with prices from $ 159. Note that this is only the price if you buy now,
waiting for the end of the program, you will have to pay $ 199 and also the retail price for Pebble Time when it officially on the shelves.

He started this blog as a hobby to show his affection for gadgets, but over the time this hobby became professional. And now he is working as a full-time blogger, but in free time he loves watching movies and games. PayPal donation for TechToyReviews will be appreciated.
@https://twitter.com/Techtoynews
Previous Leica MP Typ 240 Safari kit Launched at $ 9990
Next Xperia E4g with 4G LTE, 1.5GHz SoC Launched at EUR 129