Microsoft has launched a new big tablet called Microsoft Surface Hub mainly for Business or corporate sector customers. This tablet runs Windows 10, it possesses a large touch screen with two 55-inch and 84-inch options. This device was born after the Microsoft bought the company specializes in providing perceptive pixel multitouch panel size 2 years ago. The company did not say much about the internal configuration of the tablet, we only know that at the top, bottom and sides of the Microsoft Surface Hub that integrates multiple sensor Kinect to recognize the person sitting in the conference room as well as taking orders voice of one by one. Other devices which are runs Windows 10 can connect and transfer content to Surface Hub, where people can continue to interact with a Surface Pen or finger. 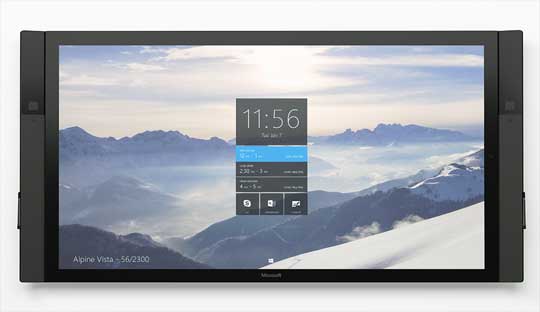 The Microsoft Surface Hub can run any software compatible with Windows 10, such as Microsoft Skype, OneNote, Office, outlook software etc. However, Microsoft has revised the Windows interface a bit to suitable when used on a large screen as Surface Hub, such as the Skype button to call quickly, a white board to draw up OneNote to write it, the shortcut to connect to the other Windows 10 devices. Snap feature to attach two parallel applications running on Windows still remain at the Surface Hub so that users can just call the video just write notes. 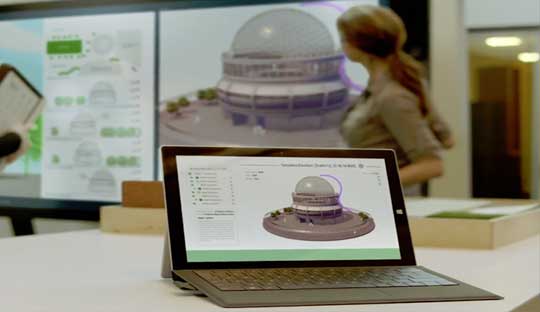 The iPad users can also connect to with this big tablet to share files through Microsoft software such as Word, Excel, PowerPoint for iOS. Surface Hub is targeted for use in conference rooms, where many people need to work together and share information with each other. Skype also plays an important role in the conference in order to connect with partners and remote workers, and other Windows software make the task of information exchange. When the meeting ended, notes or changes in Surface Hub can be synchronized to the smartphone, tablet or PC running Windows 10. And above all, to prove that Microsoft’s Windows 10 operating system is extremely flexible, it can run on any type of device with large or small screen size. This Microsoft Surface Hub tablet is big enough for several people to interact simultaneously via the touch screen and it is primarily for the retail stores.

He started this blog as a hobby to show his affection for gadgets, but over the time this hobby became professional. And now he is working as a full-time blogger, but in free time he loves watching movies and games. PayPal donation for TechToyReviews will be appreciated.
@https://twitter.com/Techtoynews
Previous Windows 10 for the Mobile with improved interface and new applications
Next Microsoft Hololens: A virtual reality glasses running Windows 10