According to Microsoft, the Lumia 430 Dual SIM is the cheapest Lumia smartphone ever with a price tag of only $ 70.

The Lumia 430 Dual SIM will own a 4-inch screen with a WVGA resolution of 480×800 pixels, it’s powered by Qualcomm Snapdragon 200 chip, a 1.2GHz dual-core processor with 1 GB of RAM. The phone has a 8 GB of internal memory which is further expandable via microSD card up to 128 GB.

The Microsoft Lumia 430 Dual SIM smartphone also features a rear camera of 2 megapixel while 0.3 megapixel front facing camera. The phone is packed with a 1500 mAh battery which is delivered Talk time up to 8.4 hours on 3G network and Standby time up to 19 days on 2G network according to the Microsoft. 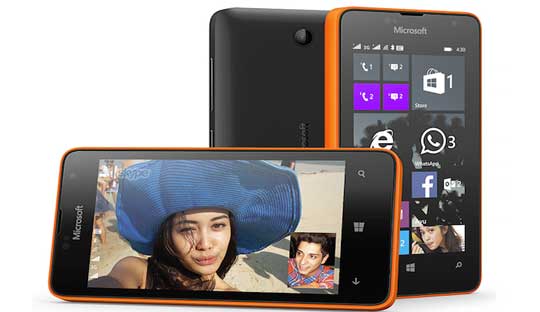 Microsoft said the Lumia 430 Dual SIM will be available in March 2015 in the Asia – Pacific, India, Middle East, Africa, Russia, Kazakhstan and Belarus.

This Dual SIM Lumia 430 is the newest member of cheap smartphones that Microsoft launched recently. Earlier, two other cheaper models were introduced by Microsoft, including Lumia 435 and Lumia 532. At the opposite segment, Microsoft said that they would launch high-end smartphones after finishing when Windows phone 10 processes.

He started this blog as a hobby to show his affection for gadgets, but over the time this hobby became professional. And now he is working as a full-time blogger, but in free time he loves watching movies and games. PayPal donation for TechToyReviews will be appreciated.
@https://twitter.com/Techtoynews
Previous Micromax Canvas Juice 2 with 3000 mAh battery and Android Lollipop OS
Next Vector SmartWatch with battery life up to 30 days