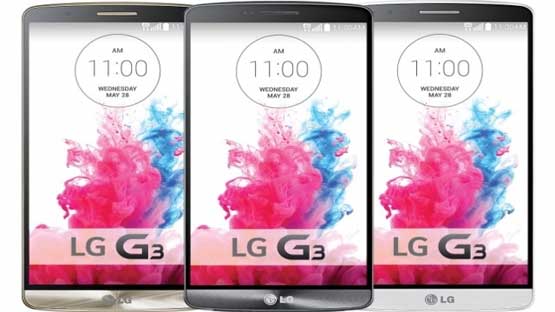 Like the original, version LG G3 Dual LTE is equipped with a QHD touch screen display, resolution of 1440×2560 pixels with a size of 5.46 inches and a pixel density of 538ppi. The processor also remained the same Qualcomm Snapdragon 801 chipset with quad-core processor of 2.5 GHz.

Thus the new in this phone is amount of RAM is increased from 2 to 3 GB, and capacity built-in memory from 16 to 32 GB. LG G3 Dual LTE, as the name implies, allows Dual SIM, one for 2G networks and the second for all networks likes 2G, 3G and LTE.

The LG G3 Dual LTE smartphone is equipped with a 13 Megapixel rear camera with improved optical image stabilization OIS with laser autofocus and that allows you to capture high-definition pictures and videos, it’s a perfect standard camera phone at this time. During video recording, high-quality sound is ensured by measuring the acoustic parameters of the environment and optimizing the parameters volume. And the front camera of 2.1 megapixel.

LG G3 Dual LTE is comes with a 3000 mAh battery capacity which is also replaceable, in which the metal cathode replaced by graphite, which will increase more battery life.

In Russia, the LG G3 Dual LTE will be an estimated price of 27,000 rubles, approximately Rs. 39,000. Now it starts to go out for sale in various countries, it is expected that India will certainly come sooner. Also see LG G3 Review.

He started this blog as a hobby to show his affection for gadgets, but over the time this hobby became professional. And now he is working as a full-time blogger, but in free time he loves watching movies and games. PayPal donation for TechToyReviews will be appreciated.
@https://twitter.com/Techtoynews
Previous Sony Alpha a5100 compact cameras review
Next NVIDIA Shield Tablet LTE Reviews