If the following year, Samsung shipped Galaxy Note Edge smartphone devices, it will be heated encounter between the two big smartphone companies. The LG G Flex 2 News that comes with new generation curved screen smartphone will be launched next year. 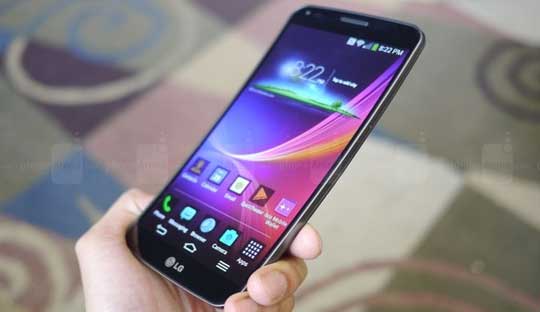 Recently Phonearena published about the LG G Flex 2 rumors that LG will continue to launch smartphone LG Flex curved screen smartphone, but this is a new version. About the LG Flex 2 release date-LG G Flex version phone is expected to appear at CES 2015, this event will take place from 1 to 6-1-2015 at Las Vegas, USA.

Like the early LG G Flex smartphone, LG G Flex 2 will be equipped with P-OLED curved display with amazing flexibility, able to recover from the small scratches, which is the main LG G Flex 2 Features.

Most of the major reputable technology pages, confirm that LG G Flex 2 version will own small screen, can only 5.5 inches. However, the resolution of the screen is higher than the first-generation version. The first LG G Flex Cell Phone is equipped with 6-inch screen with 1280×720 pixels.

Up to now, there is no too much information about the LG G Flex 2 phones, but there is a very interesting device that will run on the Android 5.0 Lollipop platform.

This year, the conference at IFA, Samsung raveled the Galaxy Note Edge smartphone. This is considered a very clear move from the South Korean company to increasing the worldwide users demand by presenting smartphones with unique designs, impressive and strong configurations.

He started this blog as a hobby to show his affection for gadgets, but over the time this hobby became professional. And now he is working as a full-time blogger, but in free time he loves watching movies and games. PayPal donation for TechToyReviews will be appreciated.
@https://twitter.com/Techtoynews
Previous HP ElitePad 1000 G2 Tablet Review
Next Lumia Concept Smartphone with Unique Camera Design