LG unveiled Isai FL version called LG Isai VL smartphone equipped with QHD screen with a resolution of 2,560×1,440 pixels. It is considered a variant of the LG G3 exclusively for the Japanese market. 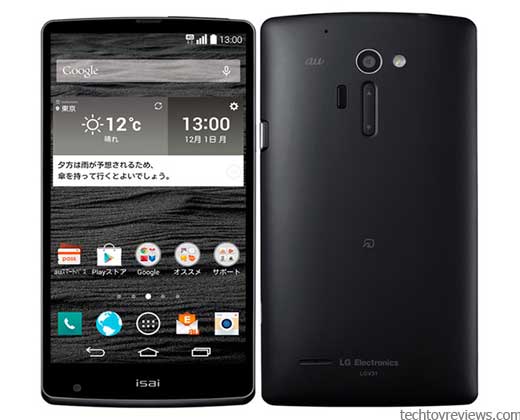 Only a few months after the launch of Isai FL version with significant upgrades, additional configuration and many valuable features. LG Isai version VL phone is updated to the 3GB RAM and other configurations are similar to LG Isai FL Phone.

LG Isai VL smartphone not only equipped QHD screen with a pixel density of 534ppi as its predecessor, but is enhanced to 3 GB of RAM. LG Isai VL is also the first smartphone, which is supported Voice over LTE (VoLTE) in Japan.

New LG Isai VL owned QHD touchscreen display of 5.5 inches, rear camera of 13 megapixel and 1.3 megapixel front camera. 3000 mAh battery comes to standby time of up to 580 hours. In addition to 32GB of storage available, users can expand the storage capacity up to 128GB via a microSD card. LG Isai VL comes with Snapdragon 801, 2.5GHz quad-core processor. This phone is also equipped with the basic connectivity such as Bluetooth 4.0, WiMAX +, infrared sensors, NFC and also features water and dustproof technology.

LG Isai VL has pre-installed Android 4.4 KitKat, distributed exclusively by KDDI network in Japan and will go on sale with 3 colors including aqua blue, black, pink and light yellow. Most likely, this phone does not have access to international markets.

In terms of size, this new LG Isai VL weighs about 154g but the overall size of the phone is 145x76x10.5mm. With strong configuration, many people even said that LG Isai VL is another version of the LG G4 will premiere next year. However, it is still too early to speculate LG Isai VL will resemble  to LG G4 or LG G3, besides, international users will hardly reach this phone because it was sold in the domestic market of LG Japan.

He started this blog as a hobby to show his affection for gadgets, but over the time this hobby became professional. And now he is working as a full-time blogger, but in free time he loves watching movies and games. PayPal donation for TechToyReviews will be appreciated.
@https://twitter.com/Techtoynews
Previous Lava Iris 500 budget Android smartphone at Rs. 5,039
Next Panasonic P55 smartphone with 1.2 Quad-core only in Rs. 8,899