There are not too many major changes compared to older one 7, iOS 8 focuses on features, in order to better support users in the operation. So that’s what exciting new features, invite you to take a look at the list below.

One of the most anticipated features in iOS 8, that performance directly from the notification bar. Previously, if you want to answer a message, or view a message from the 3rd party applications, you will have to claw from the top down, and accessing them by touching message-notification there. And now everything is simple and convenient, which is the ability to respond quickly to messages when it appears in the notification bar, or even comments like these new postings on Facebook. It not only works on the home screen, you can also directly execute this notification via the lock screen. 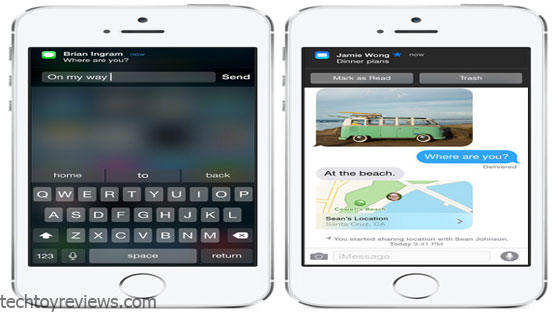 An interesting point on the iOS 8 notification bar is  ‘widgets’, however, it will not like Android. Widgets will be limited even in the section on the notification bar. A few examples of Apple to include this widget, see the point of the game on time, or even an auction item on eBay etc. 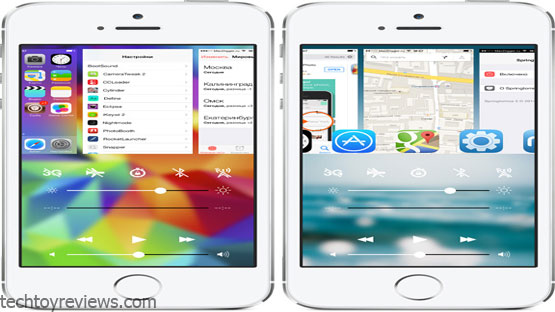 We are waiting for the bar Control Center with the ability to better customize, integrate more features, but Apple did not do it in iOS 8. Instead, it has brought up the multitasking contacts, which the user can quickly access the contact address recently, or are some of your favorite contacts and close friends. Based on that, you may call, create text messages, make video calls very quickly!

Apple pretty much pay attention to the user experience on iOS 8 And that is why the message function continues to be mentioned. Additional options useful during group messaging, which you can create a group name and leave if you want, this is not really new because it has appeared on a number of 3rd party applications like Viber. You can also share your location sites for people in the group, send voice messages, videos and even you can quickly access and search all the pictures have been sent in chat, rather than having to perform some command when access to collections, and even more annoying if you want to get back the image you sent earlier.

A very important component in iOS 8 is keyboard. More specifically, the virtual keyboard ‘QuickType’ can predict fairly accurately keywords because it can learn from your habits during typing. Not only that, QuickType can also analyze the message that someone has sent to you, and it will automatically adjust to suit the suggested words. For example, if you receive a message from your wife, asking that you will perform the evening, or go see the keys, Smart Keyboard will quickly provide key words such as A Movie, or Dinner or simply Not sure. 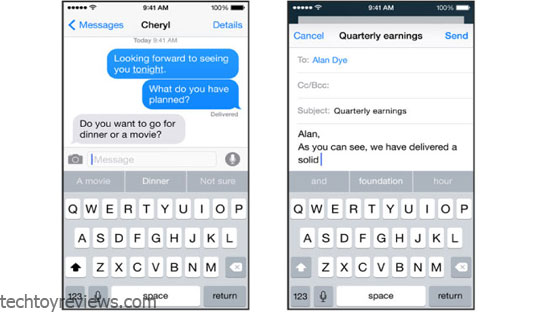 Very interesting in iOS 8 or not? QuickType keyboard can be analyzed, and previous interactions between you and someone, then it will change the ‘key words’ to suit the purpose for which you will talk to. Promises to improve the speed of texting, communicating with colleagues, or simply chat with someone.

Besides the above interesting, Apple also offers 3rd party developers keyboard, meaning that you will be using a different keyboard instead constrained by the system keyboard in iOS. However, Apple will not generous as on Android. This is not new, but this is one of immense change for Apple.

One other little surprise when Apple was hard in cooperation with a number of 3rd party manufacturers to start using all the parts. All information will be stored on the chip, this function may not be familiar to most users have jail broken iPhone 5s to operate it with Bio Lockdown.

Apple’s Mail application become more intelligent in iOS 8, with a swipe to the left to access the feature, Trash is now quite popular 3rd party applications, you can also swipe to the right to put it on the email unread status. Now compose mail, you can claw editor window down to perform some other action, such as viewing mail, find content.

Not only concerned with the user experience in iOS 8, Apple also paid more attention to their health. And it is Apple called something quite short, “Health”, rather than “HealthBook” as rumored. 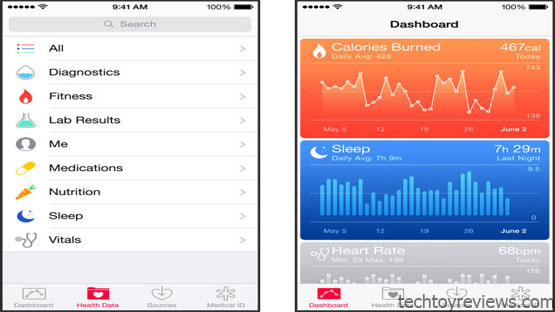 The company has embarked with Mayo Clinic to develop this application, Health focuses all the statistics about your health from a 3rd party device, reducing portion of the examination procedures doctors through information. Sadly, one thing that Apple did not say exactly supporting 3rd party app.

Health statistics will include heart rate, blood pressure, and sleep data of your calories burned. Health will implement all of the information, including your disease process. This would be really useful to doctors, it will help your doctor make fairly accurate conclusions about the condition existing at the time, instead of listening to weigh testimony from patients and information gathered during the doctor’s examination.

The tabs have the same address in Safari browser, can automatically collect into a group, the old-style news show from top to bottom.

Increase the ability to edit photos with new color filters, users can increase or decrease the image brightness, contrast, and focal points in the image intelligently in this iOS 8.

Besides, the photograph will be stored immediately on iCoud Photo Library and will be stored with the highest resolution. But maybe this will wind up wasting a lot of your memory, if free 5GB is not enough, you can pay an additional $0.99 per month for 20GB plus.

Can you name the title was partly understood its function. It is shared, but only for relatives, friends and only a maximum of 6 people. Includes applications purchased on iTunes, iBook. You can also buy and send payments to people in that group.

Increased ability to interact with the family as you can share photos, calendar. Subscribe to video, film, books, applications of its members, in collaboration with the Find My Phone to locate and more.

Mac OS 10 and iOS 8 can now get along with each other through messages, incoming calls. Hand off function lets you type faster unfinished text on another device, it supports a variety of applications such as Pages, Numbers, Keynote, Maps, Web, etc..

iCoud Driver – An application hosting-cloud sync similar to Dropbox, especially it can support both Mac and Windows platforms 2. How to use relatively simple and similar to the way that you do or do with 3rd party applications such as One Driver, Dropbox, Google Driver.

Users can now say ‘Hello, Siri!’ to launch it, it is quite similar to the ability to interact with Google Now app on a few Android devices.

Do not stop there, Apple also expanded options for Siri, such as the ability to identify songs, this feature is useful with Shazam app, shopping iTunes through commands, it can even control the connection in your home, control the individual devices together through HomeKit API. For example, you can order to sleep smart home lamp you can reduce the brightness, or door locks automatically. In addition, Apple has added 22 different languages ​​for Siri.

He started this blog as a hobby to show his affection for gadgets, but over the time this hobby became professional. And now he is working as a full-time blogger, but in free time he loves watching movies and games. PayPal donation for TechToyReviews will be appreciated.
@https://twitter.com/Techtoynews
Previous Apple iOS 8 available officially for free download
Next Oppo N3 leak photos with unique camera for selfie