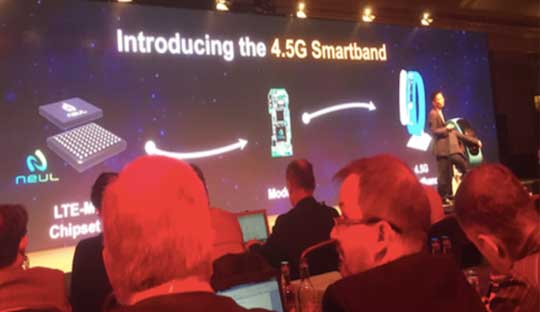 This new smart bracelet support next generation 4.5G network, according to the company 4.5G – intermediate technology between 4G and 5G. It provides data transfer speeds up to 1 GB per second and at a lower transmitter power has a larger coverage than the previous network generations.

Other notable specifications include the 1.4-inch OLED display and NFC and Bluetooth technology to connect with other devices such as a smartphone or tablet – same as Huawei TalkBand B1. More details about the Huawei 4.5G SmartBand will be known from 2 to 5 March at the annual exhibition of mobile electronics Mobile World Congress MWC 2015.

Check out Huawei Talk Band B1 Price below:

He started this blog as a hobby to show his affection for gadgets, but over the time this hobby became professional. And now he is working as a full-time blogger, but in free time he loves watching movies and games. PayPal donation for TechToyReviews will be appreciated.
@https://twitter.com/Techtoynews
Previous Leica announced the Leica MP Correspondent Camera designed by Lenny Kravitz
Next Canon C300 mark II and EOS C500 mark II will introduce at NAB 2015