Galaxy S6 will continue to connect the Galaxy generation of Samsung smartphones in the luxury segment. As the market share in the premium segment is under iPhone 6 and Galaxy S5, the Samsung seem to fade Galaxy S6 with 4GB of RAM, 4K display will be appearing sooner than expected. 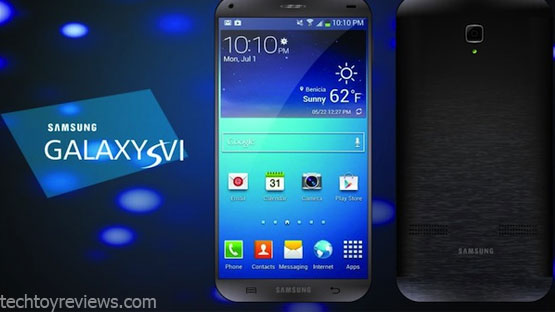 Galaxy S5 Phone can’t create any new surprises, so Samsung has plans to begin preparing for the arrival of the Galaxy S6 before market share in the premium segment of the company lost more in the hands of iPhone 6.

Galaxy S6 with 4GB of RAM and the 4K display was scheduled to hit the market in the short term this is a lot of information about the Samsung announcement in his hometown newspaper. Instead will appear in the second half of next year, recent reports have indicated that the Galaxy S6 Release Date may occur sooner than expected, at the beginning of the year, at MWC 2015 will take place in March next year.

Galaxy S6 will become the most perfect device ever for the company’s technical configuration parameters. Some information leaks also revealed preliminary shows it will have 5.3-inch screen 4K resolution with 3840×2160 pixels, with next generation Super AMOLED technology.

And to provide enough energy for this screen, the Galaxy S6 will have a super powerful processor. According to media and news sources, this processor is Qualcomm Snapdragon 810 with eight cores are built in 64-bit architecture helps to play 4K video smoothly, in addition to the device has 4 GB of RAM to take advantage of 64 bit technology.

Galaxy S6 can also equip with 20 Mega Pixels rear cameras and eye scan security technology, the chassis will have the appearance of metallic materials. Of course, this immediate information just speculation and do not be too surprised when this information is modified in the future.

Galaxy S6 with a 4K display and 4GB of RAM, it definitely makes the world technology feel restless waiting for the arrival of Samsung’s latest Smartphone. There not any further news of Samsung Galaxy S6 Price, but we sure its revealed soon.

He started this blog as a hobby to show his affection for gadgets, but over the time this hobby became professional. And now he is working as a full-time blogger, but in free time he loves watching movies and games. PayPal donation for TechToyReviews will be appreciated.
@https://twitter.com/Techtoynews
Previous ASUS released the new update for ZenFone 4
Next HTC Desire 320 officially unveiled with very low price