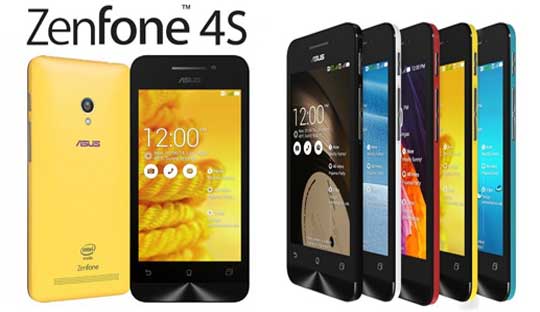 The Asus Zenfone 4S can replace the position of previously marketed Asus Zenfone C. In the event of Jakarta, Indonesia, ASUS surprised when bringing a new product with custom configurations, better battery life and the same design as the previous Asus products.

Specifically, according to a list of products available at the press conference, Asus Zenfone 4S codenamed ZC451CG owns 4.5 inch screen with a FWGA resolution of 854 x 480 pixels and powered by an Intel Atom Z2520 processor clocked at 1.2 GHz. The phone is available in number of RAM options such as 1GB or 2GB RAM and 16 GB of internal memory of the device.

Similarly Zenfone 2, Asus also divided into two versions for Zenfone 4S, including 2 GB or 1 GB RAM and internal memory of 8 GB or 16 GB. Asus also provides Pixel Master technology for this model, however, the design of Zenfone 4S is not much different than its predecessor model. 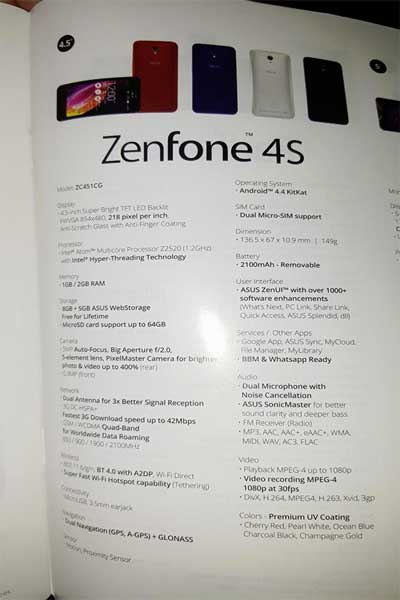 Besides, Zenfone 4S with 5-megapixel rear camera has aperture f / 2.0 system equipped with 5 lenses bundled proprietary, Pixel Master technology of Asus allows photography and video up to 400% brighter. However, it has only 0.3-megapixel front camera.

The battery inside the harga Asus Zenfone 4S with a capacity of 2100 mAH and it has built-in Android 4.4 KitKat operating system with ZenUI interface.

According to information on the Asus website, Zenfone 4S will be available in three color options such as black, white and red. The Zenfone 4S price in Indonesia for 8 GB memory and 1 GB RAM version, at 1240 RP approximately $150. The selling price and official release date of this product have not been disclosed and may only be sold in certain markets. We will be constantly updated on this Asus Zen Phone 4S. Check out some of Spec Asus Zenfone 4S below:

He started this blog as a hobby to show his affection for gadgets, but over the time this hobby became professional. And now he is working as a full-time blogger, but in free time he loves watching movies and games. PayPal donation for TechToyReviews will be appreciated.
@https://twitter.com/Techtoynews
Previous Sony RX1-X: Coming Soon
Next Adobe Lightroom CC with new features: Face recognition and HDR Merge