Apple Watch: All three versions with 8 GB internal memory, only 2 GB for music and 75MB for photos

Apple confirmed that all three versions of Apple Watch with 8 GB of internal memory, but users can only get 2 GB for music storage and 75 MB to store images. 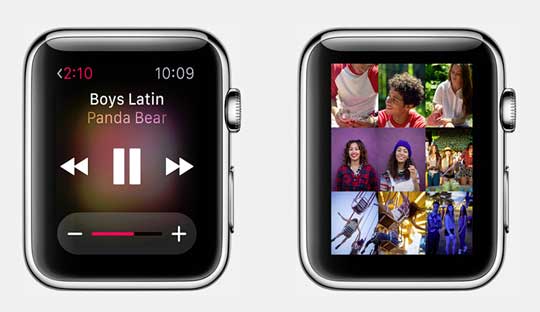 Remaining space used to store the operating system and application cache to run faster. A 2 GB memory can store around 100 sound tracks (high bit-rate), can be heard via Bluetooth headphone, while 75 MB can store 100 images. The Apple Watch automatically reduces the image resolution to fit the Watch screen. The sound tracks and images can be heard and viewed even when iPhone not connected to Apple Watch, users can sync the sound tracks and image through Apple Watch application installed on iPhone with iOS 8.2.

All three Apple Watch sport 8 GB memory, with 2 GB, you can use it to store some of your favorite songs to listen while jogging or walking without having to connect to the iPhone. And 75 MB image memory is actually not much, but Apple says it will automatically reduce the image size during Import the file, therefore it will contain more than 100 photos.

In the future, the world technology is expected that Apple Wrist Watch can expand memory capacity, can be 16 GB. The memory capacity will allow users to store more data, better serve the entertainment needs of the global users.

All versions of Apple Watch price starting from $ 349.

He started this blog as a hobby to show his affection for gadgets, but over the time this hobby became professional. And now he is working as a full-time blogger, but in free time he loves watching movies and games. PayPal donation for TechToyReviews will be appreciated.
@https://twitter.com/Techtoynews
Previous Olympus Stylus SH-2 Camera: 24X zoom, 5-axis image stabilization Launched at $ 400
Next Google Chromebook Pixel 2 with USB type-C and Intel Core i5 or i7 SoC Launched at $ 1000