Zenfone 2 Camera with many impressive features Promotional video from Asus

Asus has just released the official promotional video clip for the Asus Zenfone 2 Camera with many impressive features. 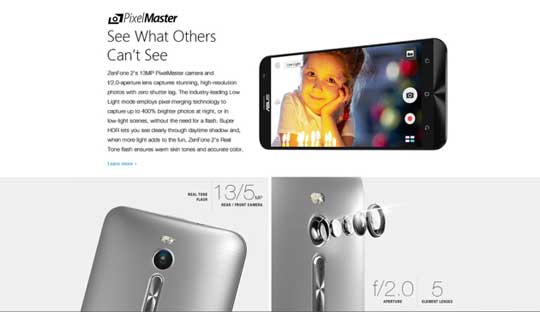 Not only promote powerful hardware with up to 4GB of RAM, Asus introduces the emerging technology on Zenfone 2 Camera of 13-megapixel with PixelMaster technology, this feature helps significantly improve image quality in low light conditions and better contrast with 400% Super HDR. True-Tone LED flash lights bring true colors. Panorama shooting, Selfie mode with wide angle up to 140 degrees, fast charging technology and SonicMaster audio technology. And there are many other impressive features are integrated from the manufacturer, you can also check out the video below:

Thus, Asus has officially sold the Zenfone 2 with extremely attractive prices around $ 285 for the version with the highest RAM, this is the price for Taiwan, likely to be higher when the sample products are widely distributed to many other markets. In addition, Asus also adds 64GB version on its official site.

He started this blog as a hobby to show his affection for gadgets, but over the time this hobby became professional. And now he is working as a full-time blogger, but in free time he loves watching movies and games. PayPal donation for TechToyReviews will be appreciated.
@https://twitter.com/Techtoynews
Previous Canon 5D Mark IV with 28MP sensor and 4K video recording Rumor
Next Lumia 640 and Lumia 640 XL listed with high prices in the UK