Sony Xperia T3 can be seen as a miniature version of the Xperia T2 Ultra. Because of the screen size was reduced to 5.3 inches instead of 6 inches. 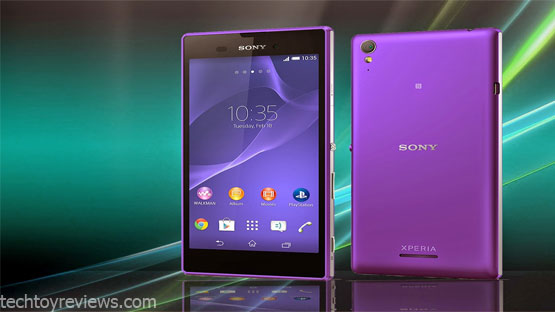 The pre-installed Android 4.4 operating system is considered one of the leading edge for Sony Xperia T3 in the present time. True to the saying, “this is going to take the other” specs of Xperia T3 cut slightly from T2 Ultra predecessors, including the 13MP camera to 8MP and reduce the battery from 3,000 mAh to 2,500 mAh. But in return, Sony T3 panels of the IPS type, rather than TFT.

Coming to Sony Xperia T3, it has balance design with modernization, which means that the device’s appearance will look a little different than the line of Xperia in recent years. And that first appeared in the mid-range smartphone, rather than being the flagships top device opened goods.

Still follow the footsteps of its predecessor, Phone use plastic body which is friendly with fingers. However, this resin is not glossy format, so fingerprints will stick to pretty much limited and if you choose white or purple colors, it is hard to see clearly the inadequacies. But overall the phone is manufactured using high quality plastic, but at least the power button on/off, lock screen is completely machined metal.

Accordingly, you will not only like the “mini” of the appearance of the phone, the phone is very much thinner only 7mm. The Xperia T3 on experience in a long time will be very comfortable and fits, it’s not even mentioning the light weight smartphone just 148g.

Triluminos technology display over represented in 2013 by Sony have applied it on high-end BRAVIA TVs. Of course, this technology is really the best on BRAVIA TV, it was developed from Color IQ of QD Vision.

In fact on the Xperia logo Triluminos, just a software implemented to improve the color of the screen, by improving color change. It works in parallel with X-Reality, this technology will enhance sharpness, contrast of image and video display capabilities as possible.

Triluminos technology automatically adjusts the background sky, color or sea, etc. to re-create a picture and it was the most natural way, are no longer the phenomenon of sky and sea joint itself together. Also when to display the details needed highlight, Triluminos also automatically adjusted so that it becomes more vivid. Finally, unlike Xperia T2 Ultra, Sony LCD uses IPS panels for Xperia T3 so that it highlights leading better viewing angles compared to previous products.

Sony Xperia T3 with Qualcomm Snapdragon 400 chipset. Field SoC provides Cortex-A7 1.4 GHz quad-core processor with Adreno 305 graphics system and 1GB RAM. As you may well have seen the performance of Snapdragon 400 on the Motorola Moto G, Sony Xperia Ultra T2, M2 Xperia, HTC Desire 816, HTC One mini 2 and many other smartphones, pretty amazing and it has become the popular choice in the midrange smartphone.

Starting performance tests with the standard CPU, Xperia T3 brought some good points through Geekbench 3 applications (multi-core test), rivals used S400. However, still behind HTC One Mini 2 AnTuTu is a synthetic benchmark, test RAM and CPU / GPU, device beat most of the other competitors, except HTC Desire 816.

Xperia T3 8MP camera using  RS Exmor sensor of the Sony, with the ability to capture an image at a resolution of 3264×2448 pixels in manual mode and Superior Auto 3104×1746. In addition, LED Flash light support for a better night.

Sony was putting 2500mAh battery for Xperia T3, this number decreased significantly compared with the T2 Ultra 3000mAh. To test battery life of the device with special technology called a power saving mode, T3 can head to 75 hours for the average user: web browser with Wifi, watch videos offline via 3G and talk for an hour each.

Stamina mode will have the option to disable the user functions are not needed as Wi-Fi, Bluetooth, a new notification or alarm when the smartphone is idle, In a standby increasing time of up to 400%. At the same time, users can also choose the applications list and disable background applications do not need to use.

If you feel that the Sony Xperia T3 looks too big Ultra T2, the Xperia will make your absolute satisfaction. Not only excellent in terms of shape, but engine performance is also very good compared to its predecessor as well as competitors in the same segment. Sony Xperia T3 Price is 24,829 at online shopping stores.

He started this blog as a hobby to show his affection for gadgets, but over the time this hobby became professional. And now he is working as a full-time blogger, but in free time he loves watching movies and games. PayPal donation for TechToyReviews will be appreciated.
@https://twitter.com/Techtoynews
Previous LG G Watch: Full Review
Next Apple iOS 8 available officially for free download