After introduced in China, the new smartphone Xiaomi Mi4 is available for sale in India. This will be a powerful smartphone with high configuration go on flash sale by Flipkart on next February 10-2015. The first new batches of Xiaomi Mi4 price are little high, 19,999 rupees for the 16GB version. 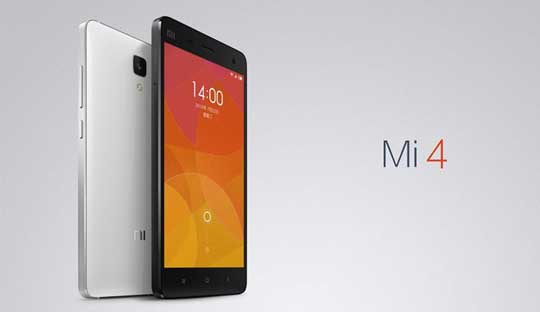 So apart from the Display, the other components of the Xiaomi Mi4 are significant upgrades to its predecessor Xiaomi MI 3 launched last year.

The Xiaomi Mi4 use IPS LCD display of 5-inch Full HD resolution of 1080×1920 pixels with a pixel density of 441ppi. It has a JDI OGS full lamination display, very sharp and bright color with wide viewing angle and high brightness. It has a good viewing angle, color and contrast are not changed when looked at from different angles.

The Xiaomi Mi4 smartphone perfect for everyday tasks and high-end games with Qualcomm Snapdragon MSM8974AC 801 chip, 2.5 GHz Quad-core processor – krait 400, Adreno 330 graphic processor and 3GB of RAM. The Xiaomi Phones have a two options in memory 16GB and 64GB, for now the price and availability of the 64GB version is still unknown.

The Xiaomi Cell Phone comes with Android 4.4.2 operating system with factory-installed MIUI interface. This customizable interface brings a new experience. Besides, Xiaomi Mi4 Xiaomi MI 4 also put quite a lot of interesting features such as an automatic screen lock when the phone goes in pocket, bag and shake to change the song or and video playback.

The Xiaomi Mi4 13 megapixel rear camera with Sony COMS sensor, aperture f / 1.8 with flash and the camera in front up to 8 megapixel meet all needs to take a selfie picture of users. The rear camera also supports 4K video and HDR video recording capability.

Also, the camera app allows users to customize many settings that enhance the photographic such as white balance correction, shutter speed, direct HDR photography, manual focus etc. It has a 3080mAh Li-ion Battery capacity up to 280 hours standby time on 3G network. Check out Xiaomi MI 4 Specs below:

He started this blog as a hobby to show his affection for gadgets, but over the time this hobby became professional. And now he is working as a full-time blogger, but in free time he loves watching movies and games. PayPal donation for TechToyReviews will be appreciated.
@https://twitter.com/Techtoynews
Previous Xolo Q520s with Mediatek SoC, 5MP rear Camera Launched at Rs. 5,699
Next iOS 8.1.3 is officially available for download