Xiaomi ready to hit every segment in the market with the product line runs many different mobile platforms and smartphones, even as the special symbol of many firms in the car the world. Xiaomi seemed quite busy with plans for the future. While the world has learned to campaign in cooperation with Microsoft testing Windows 10 operating system on Xiaomi MI 4, the recent re-release of information Xiaomi is preparing to launch smartphone generation is cheap next Xiaomi Ferrari. 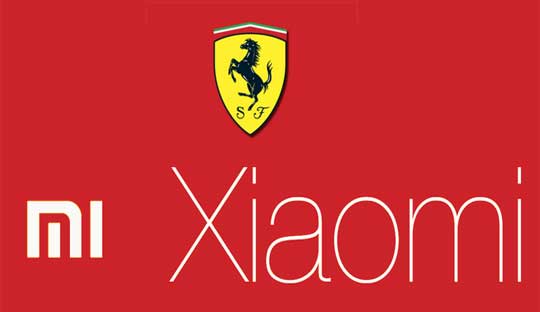 This information was revealed in the list of registered benchmark. The Xiaomi Phones plans to launch the ultra affordable smartphone device priced at $ 64 is at the center of public opinion when it comes to brand Xiaomi phone. We can reveal, the device is rumored to be quite a lot in recent years to own a good specification with reasonable price.

Now Xiaomi confirmed they will launch a new midrange smartphone model called Xiaomi Ferrari comes with a 4.9 inch Full HD touch screen display with a resolution of 1080×1920 pixels, Qualcomm Snapdragon 615 chip, a 1.65 GHz octa-core processor, Andreno 405 graphics chip and 2GB RAM with 12 GB of internal memory. A special feature of the Xiaomi Smartphone is that it will add the logo of Ferrari, a worldwide famous car brands. 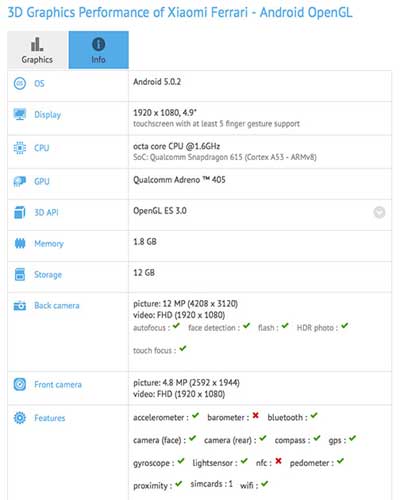 In addition, the Xiaomi Ferrari is featuring a 12 megapixel rear camera which is capable of Full HD video recording support HDR features. The front camera is a 4.8 megapixel to take a Selfie and handset comes with a loaded bunch of sensors. The phone is running MIUI interface based on the latest Android 5.0.2 Lollipop. Currently, the design and Xiaomi Ferrari price has yet to be revealed.

This is a new step on the path of integration Xiaomi worldwide. Before Xiaomi, Huawei has also combined with the “Gunners” Arsenal to create a special edition to provide in some specific markets.

Looking at the Xiaomi Ferrari Specs, quite similar to its predecessor Xiaomi Red MI debuted in the past, but we cannot guess the purpose of the introduction of this mysterious device. Very likely, Ferrari will be a pioneer for a new line of Xiaomi devices.

Current information on the Xiaomi Ferrari device has not been officially announced and we could only wait for the any official update from Xiaomi.

He started this blog as a hobby to show his affection for gadgets, but over the time this hobby became professional. And now he is working as a full-time blogger, but in free time he loves watching movies and games. PayPal donation for TechToyReviews will be appreciated.
@https://twitter.com/Techtoynews
Previous Facebook New Feature On This Day
Next Apple Watch on Your Hand without spending a single penny!!!