News from the Videocon Industries, our attention is invited to a new smartphone called Videocon Infinium Z50 Nova. 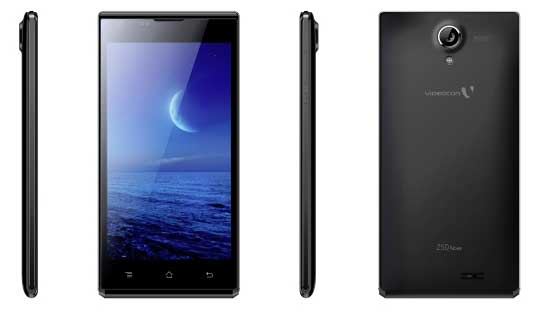 Videocon Mobile on Monday announced its new smartphone called Infinium Z50 Nova runs on Android 4.4 KitKat. In India, the smartphone is worth 5,999 rupees, and will have a black and white body color.

Videocon Infinium Z50 Nova Smartphone from Videocon Telecom is a Dual-SIM and runs on Android 4.4.2 KitKat OS. It is equipped with a 5-inch QHD display with IPS panel and a resolution of 960×540 pixels, 1.3 GHz quad-core processor with MediaTek MT6582 chip and Mali 400 GPU and also supports 1 GB of RAM. The smartphone has on-board 5 megapixel rear camera with autofocus, Sony Exmor R sensor with LED flash and the front camera of 2 megapixels. The Videocon Infinium Z50 Nova smartphone is equipped with 8 GB of internal memory, which is also expand via MicroSD card up to 32GB.

In general, the phone is quite presentable form with a small set of features and low cost. The Videocon company also recently launched its flagship smartphone, having the name of Videocon Infinium Graphite and costs 11,500 rupees. It’s runs Android 4.4 KitKat and offers Dual-SIM support. Videocon Infinium Graphite is equipped with a 4.7-inch HD OGS display with a resolution of 1280×720 pixels and protected by Corning Gorilla Glass 3.

Videocon Infinium Graphite also contains 1.3 GHz quad-core processor with 1GB of RAM. The smartphone comes with 16 GB of internal memory, which is expandable via MicroSD card up to 32GB. The rear camera of 8 megapixel with LED flash and the front camera of 5 megapixels.

He started this blog as a hobby to show his affection for gadgets, but over the time this hobby became professional. And now he is working as a full-time blogger, but in free time he loves watching movies and games. PayPal donation for TechToyReviews will be appreciated.
@https://twitter.com/Techtoynews
Previous Facebook Year in Review: looking back to 2014
Next Samsung Switch Concept Smartphone: Touchwiz to Android Lollipop