The best tablet on the market under $400

In recent years, the concept of the tablet has become familiar to worldwide consumers. With the advantage of the large screen, powerful configuration capabilities for work and great entertainment.

Today, Samsung, Sony, Apple, LG, the maker of smartphone devices is targeted to tablet as a testament to the success and grow their power in this day. We can say that a very real way, the tablet is gradually approaching to replace the laptop in the future.

The advantage of using this tablet is great portability, large screen, brings high-profile entertainment capabilities, web browser and work in the best way. Although many people think, the use of large-screen smartphone will be a replacement for the tablet, but with the advantages, owning a tablet will bring many benefits to the owners. And if you’re going to find a better tablet on the market under $400, the names below will satisfy your need. 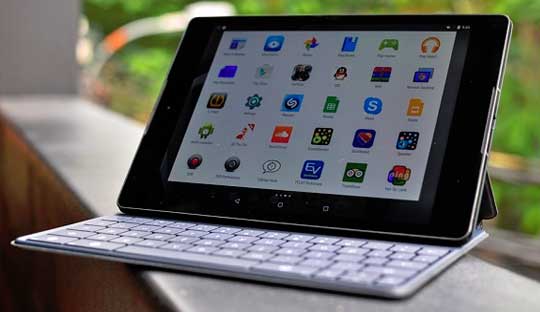 The Nexus 9 is the latest tablet from Google, other than the Nexus 6, HTC Nexus 9 is responsible for production. There are not too many of its phone characteristics on this tablet, instead of a separate language outlining the main Google and apply to their products.

The Google Nexus 9 has a very big change compared to the previous generation which is made of aluminum rim feels more polished. Thin line gives the tablet a compact design same as Apple iPad Air. The Nexus 9 tablets with a 9 inch screen powered by IPS panel for wide viewing angles, color fidelity and resolution of 2048 x 1536 pixels and a ratio of 4: 3. At this rate, Nexus with wider visibility than many rivals, supports the ability to read text and web browsing more comfortable on 16: 9 ration which is quite popular today.

In terms of specifications, Google Nexus 9 powered by a 64-bit Tegra K1 processor, a 2.3 GHz clock with 2GB of RAM and running latest Android Lollipop platform. In addition, the tablet is equipped with 6700 mAh capacity battery for continuous operation capability of 8.5 hours with 4G connectivity, a continuous 9.5 hour movie with and standby time up to one month. HTC has cleverly added their features on Google Nexus 9 such as Boomsound Stereo speakers, this tablet can play the sound with better quality. 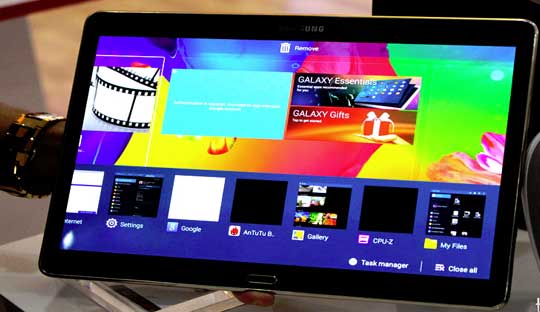 The Samsung Galaxy Tab S has two versions of a 8.4-inch screen and a 10.5 inch screen. In contrast to the disappointment named Galaxy S5, the duo of Samsung tablet brings positive effects and much more different than before.

In terms of design, Galaxy Tab S line of new products is a radical change compared with the sample models of Galaxy Note lineup ago, with the fake metal layer case design and detailing, glossy painted surface after the light changes color, the front features a large screen and a deep black color characteristic of AMOLED screen, the duo of Samsung Galaxy Tab S implement strong impression right from the original look.

The Samsung Galaxy Tab S 10.5 has more prominent with larger screen sized up to 10.5 inches. This is one of those rare tablet ownership screen with a 2K resolution is known in the market. Two detailed above plus the use of Super AMOLED display technology makes visibility on Tab S 10.5 really impressed. 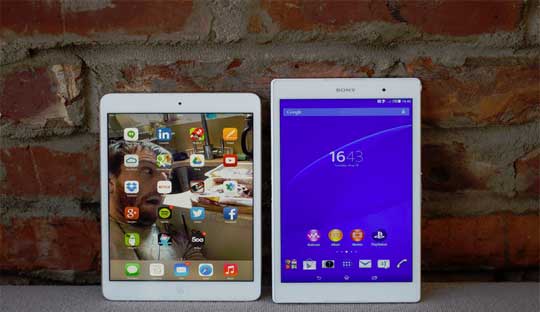 The highlights of the Sony company array in recent years with the emergence of Xperia Z3 Tablet Compact with ultra-thin design, ultra-light and ultra-powerful configuration.

But in fact, the blockbuster of Sony usually cost quite and this causes a gap between firms and consumers. Still, can not be negative on Sony Xperia Z3 Tablet Compact worth owning in present time and in the future price of this product will decrease as the Sony Xperia Z4 tablet sold on the market.

Sony Xperia Z3 Compact Tablet with a Triluminos 8 inch display with Full HD resolution to pixel density 275ppi and displays 16 million colors. The tablet with heavy confrontations, it has Qualcomm Snapdragon MSM8974AB 801 chip, with a 2.5 GHz quad-core processor, Adreno 330 graphics with 3GB RAM, 16GB internal memory with memory card slots expansion of up to 128 GB. With such a configuration, the tablet promises a smooth performance, better multitasking, ensuring leisure moments of the user.

It would be a great pity if not mention tablet from Apple. For several years now, the iPad has been always top of the world’s best tablet and newest product samples iPad Air 2 is no exception.

Currently the Apple iPad Air 2 tablet still leads the top of just 6.1 mm thin design. However, part of specifications and capacity of the operation, not flimsy or fragile as it looks. Using a powerful operating system such as iOS 8.1, upgradable to iOS 8.3 with Apple A8X chip and a 1.5 GHz Triple-core CPU, making the application as well as heavy game play is handled quickly. Currently Apple ipad Air 2 is still recognized as the top rated tablets under 400.

He started this blog as a hobby to show his affection for gadgets, but over the time this hobby became professional. And now he is working as a full-time blogger, but in free time he loves watching movies and games. PayPal donation for TechToyReviews will be appreciated.
@https://twitter.com/Techtoynews
Previous The BlackWidow Tournament Chroma multi-colored backlight mechanical keyboard Launched
Next Sony Xperia Z4 with a 5.2 inch Full HD display and Snapdragon 810 SoC Launched in Japan