Stick Hero 2 is now available on the most popular platforms as iOS and Android, the game play is simple, but sometimes also interesting, not less than Flappy Bird.

The Stick Hero game is the new release of Ketchapp, manufacturers of mobile game quite successfully take the path of simplification in both graphics and gameplay, an effective way of 2014 after the success of Flappy Bird by Dong Nguyen. Maybe the name Ketchapp unimpressive with the listener, but this is also the author of the cult game time through 2048, Do Not Step On The White Tile, Amazing Ninja etc. 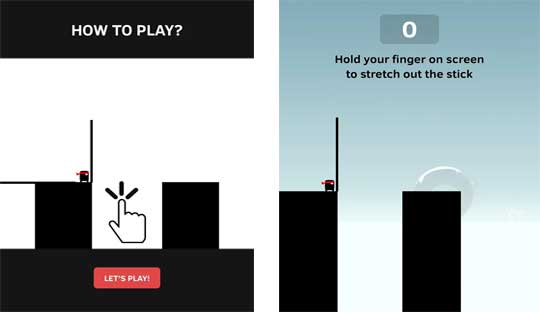 Back to Stick Hero, the game is quite simple graphics and fun, whose mission is to bridge to the protagonist can go through the pile of blocks on the road. Number of spindles passing is also the number of players.

How to play the Stick Hero – Click and hold on the screen to build sticks, long press for the longer stick. Players need to calculate and true alignment to the standards lowered, this need perfect sticks to reach the pile. Longer or shorter sticks will cause the character to fall off a cliff and lost, but if the stick is right in the middle will be a plus point.

In addition to the score, another indicator is also quite necessary, it is the result of earning. This number will be used to unlock other characters – on the home screen of the game, funny and the original character. And if you want to quickly unlock all the characters they can spend money to buy.

And for Windows Phone users, though undeveloped Ketchapp Stick Hero App for the Windows platform, but you can also download a few games with the same name and similar gameplay.

He started this blog as a hobby to show his affection for gadgets, but over the time this hobby became professional. And now he is working as a full-time blogger, but in free time he loves watching movies and games. PayPal donation for TechToyReviews will be appreciated.
@https://twitter.com/Techtoynews
Previous Vaio Smartphone will officially present at CES 2015
Next Videocon Infinium Z45 Nova Quad-core Smartphone only in Rs.4,999