The latest smart wear news that Sony has officially launched The New Smartwatch 3 in the US for $249.99. 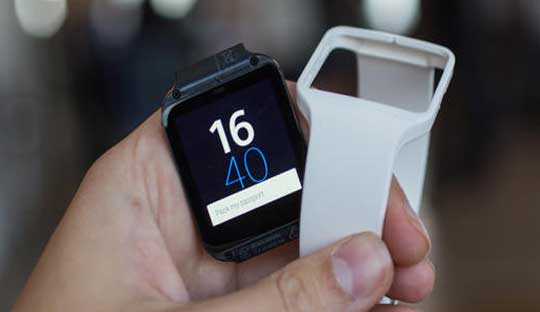 After a long period of time you have been waiting to buy Sony’s latest SmartWatch. Smartwatch generation, Sony will officially go on sale in late November, but now users in the US have been able to put before the SmartWatch through Google Play for $ You can order this Sony SmartWatch 3 through Google Play and the time the customer receives the watch is within 2 or 3 working days, depending on the region.

Sony SmartWatch 3 was introduced at the IFA technology conference being held in Berlin, Germany a few months ago. SmartWatch 3 running Google’s latest Android Wear platform with 1.6-inch screen resolution of 320×320 pixels, 1.2GHz quad-core ARMv7 processor, 512 MB of RAM and 4GB of internal memory. In addition, the watch also supports NFC, WiFi and GPS navigation feature which is helping users track their location and directions instead of having to use the smartphone.

In addition, the SmartWatch 3 is also equipped with Bluetooth connectivity thereby supporting the user to listen to music via wireless headphones and battery capacity of 420 mAh. This device also comes with a water resistant technology.

SmartWatch Wear with the Android platform, users can issue voice commands through the integrated microphone, other features include an accelerometer, gyroscope, compass support data collection and also monitoring the user’s health condition. Currently, not clear news about the Sony SmartWatch 3 Release Date in India and other countries as well.

With the arrival of the SmartWatch 3 times we’ve had a lot of choice for smart Android Wear, unfortunately that does not have any information on LG or Samsung Watch, the Sony brought their equipment on sale genuine at all.

Japanese electronics also added that the company intended to give users more options to customize the individual and third party applications to support its equipment. The company also said it has developed a metal strap parallel to the silicon material typically found for the user to select and replace their Sony SmartWatch 3 equipment.

With sports stylish design with many attractive features, Sony SmartWatch 3 gradually create a good impression with the world technology and attracting the attention of all users.

He started this blog as a hobby to show his affection for gadgets, but over the time this hobby became professional. And now he is working as a full-time blogger, but in free time he loves watching movies and games. PayPal donation for TechToyReviews will be appreciated.
@https://twitter.com/Techtoynews
Previous iPhone 6 Plus running Windows 98 news from China
Next HTC ONE mini 2 Review – Miniature of HTC One M8