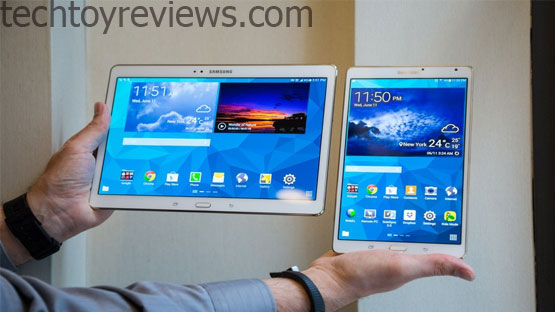 The next generation Samsung Galaxy Tab S has launched, promising to be the long-awaited tablet with futuristic technologies and the most amazing experiences for users. Galaxy Tab S with the most advanced technology in the world will perfectly meet the requirements of any person.

Samsung has shown it could build a tablet with a larger screen with a higher resolution than the competitors in this segment today, while the tablet is very thin and light in weight. It’s very easy to handle with one hand. The only minus point in this tab is a body designed from plastic and not aluminum. It has a shiny frame with luxury and elegant leather layer design for hand grip.

The front panel has a tough glass to help against scratches and impact resistance, next to the button layout and source hardware volume up button. Also, on the edge there is a headphone jack and charger jack. Retains the familiar styling in the front line of tablet PC with thin white cardboard style. The screen is solid. Back cover after the Samsung Galaxy Tab 10 is designed as the dot print. It’s a new fashion with a unique style of their product line. In addition, the white back cover also has a luxurious titanium give an individual look.

The screen of the Tab S of size 10.5 and 8.5 inches with 2560x 1600 pixels and AMOLED technology.  The most advanced technology on the current device of the Samsung. AMOLED display technology with high contrast, which would be an increase of detail, creating depth to the image. It’s capable of reproducing a wider color, better video response, play faster and smoother with every viewing angles even in direct light or outdoor conditions.

It has 2 CPU of 1.9 GHz and 1.3 GHz quad core processor with Cortex-A15 and Cortex-A7 chips. These are enough for speed. We can visualize the strength of the Galaxy Tab 10, is simply a bit of quick and 4 times better than the other common dual-core tablets in the market.

The strength of the Galaxy Tab 10 quad core CPU along with 3 GB RAM, Mali-T628 graphics processor. This configuration is enough to experience all of the standard entertainment, games and movies. For External memory, you can expand memory via MicroSD card up to 32GB and 128 GB. You can run every application with no delay and legs, allowing you to experience exciting 3D games.

The tablets are usually not known for their cameras. But in this case, it’s completely wrong for Tab S. This tab has a front camera of 2.0 MP and 8.0 MP rear cameras attached with flash and autofocus function. Also support night shooting photos with video recording capability of 1080p HD. With an 8MP camera with autofocus feature delivers sharper photographic experience on the tablet.

For fast data connection, full functional support, In addition to the standard wifi in most tablets, the Samsung Galaxy S Tab has LTE connectivity with 3G speed for download or upload data up to 42 Mbps/5.76 Mbps. Users can easily find the SIM slot for 3G.

It uses the operating system, Android 4.4 KitKat combined user interface of the Samsung TouchWiz UI. This operating system is considered as a very user-friendly and interactive capabilities for  every user. It’s very effective for work. Samsung Galaxy Tab S other useful features include ‘Multi User Mode’, which allows users to optimize their profile, with fingerprint sensor and children mode.

Samsung Galaxy Tab S version 8.4 has a battery capacity of 4900 mAh. As for the Samsung Galaxy Tab S version 10.5 is integrated with a capacity of 7900 mAh. The latest battery technology available, combined with the AMOLED screen also shows the ability to save on energy. This tablet will be very impressive, this can save up to 10-12 hours of usage.

This configuration makes the tablet process very quick to accessing images and applications. Along with that, 3GB of RAM meets all graphics challenges that give the user amazing experience. Samsung Galaxy S Tab is the thinnest and lightest tablet to this point. It’s combines advanced display technology with full high-end applications, bringing endless entertainment experience.

He started this blog as a hobby to show his affection for gadgets, but over the time this hobby became professional. And now he is working as a full-time blogger, but in free time he loves watching movies and games. PayPal donation for TechToyReviews will be appreciated.
@https://twitter.com/Techtoynews
Previous Xiaomi redmi best cheap smartphone review
Next Canon EOS 700D – 18MP / 18-55mm STM Review