Samsung Galaxy Tab A Tablet with 8 and 9.7 inch Display appeared in Russia

A Russian website has revealed information about the new models of the Samsung Galaxy Tab A Tablet. 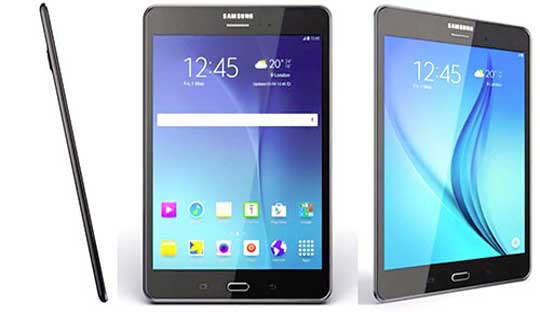 The picture shows this is the next line of Samsung tablet with aspect ratio 4:3 with two sizes of 8 inch and 9.7 inch, with XGA resolution of 1024 x 768 pixels. The aspect ratio of the Samsung is unusual, but according to the company, it will provide up to 30% more visible space when typing or up to 20% when surfing the web.

For Specifications, both Samsung Galaxy Tab A Tablet powered by a 1.2 GHz Quad-core processor, Qualcomm Snapdragon 410 chip, 2 GB of RAM, while internal memory of 16 GB, but you can expand it via microSD card up to 128 GB.

The Samsung Galaxy Tab A Tablet supports a 5 megapixel rear camera with autofocus without LED flash and a 2 megapixels front facing camera to take selfie and make video calls. For connectivity both tablets include Wi-Fi 802.11 a / b / g / n, Bluetooth 4.0, GPS, A-GPS, GLONASS and battery capacity of 4200 mAh which is providing up to 10 hours battery life. Both tablets are very thin, only 7.5 mm thick, body weight 320 and 457 grams for 8 and 9.7-inch models, respectively.

Both Tablets are running on an Android Lollipop platform, which added a special children’s mode. Parents can restrict the use of the device. Both Tablets scheduled for April 2015, Samsung Galaxy Tab A 9.7-inch will be available in two versions with LTE support at a price of 24,990 rubles – approximately $ 404 and for Wi-Fi the price of 20,990 rubles – approximately $ 339.

He started this blog as a hobby to show his affection for gadgets, but over the time this hobby became professional. And now he is working as a full-time blogger, but in free time he loves watching movies and games. PayPal donation for TechToyReviews will be appreciated.
@https://twitter.com/Techtoynews
Previous Xolo Q1001 with Android 4.4 OS, 5 inch display and Dual-SIM Launched
Next Facebook Money Transfer via Messenger starts soon