Popular gaming Manufacturer Razer has introduced a SmartBand named Razer Nabu, which is health monitoring SmartWatch with quite nice design.

SmartBand is actually a device becomes extremely potential for manufacturers. Recently, Razer has officially entered the market with the Nabu SmartBand. Razer is previously known for gaming devices and now the company has jumped into the market with a wearable device smartband Nabu

Finally, after more than 5 months of waiting, the official Razer Nabu Smartband will be sold tomorrow 2-12 at a price of $ 99.99 and $ 79.99 for beginners to those who participated in the beta version of this Nabu Smart Watch.

Razer Nabu Smartband sold with 3 different sizes to suit the user. Currently, Nabu available with dark green version features from the manufacturer, the colors will be updated in the near future. 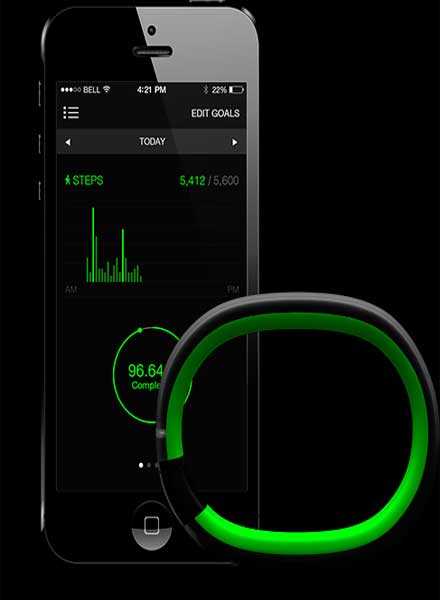 Razer help show the report on smartphone and integrated a number of features such as message display, receipt, Call reject or accept, distance measurements, daily health monitoring compatible with an Android 4.3 or higher smartphone. Nabu Razer Smart Band can operate during the 7 days with just one charge.

Razer Nabu Smartband uses Bluetooth 4.0 to connect to the phone. Nabu owns two OLED screens, a small screen will show the basic information based on simple icons. Meanwhile, the big screen at the bottom of the wrist, it would make more content, such as caller name, a brief message content etc.

Razer Nabu Smartband also be integrated accelerometer to recognize when you tilt your wrist and then it’s just able to receive or refuse the call by this operation. Inside the watch also has NFC smart to help identify Nabu users are around you. In the future, this feature can be developed more widely, for example, began to exchange such data.

Razor Nabu Release Date is confirmed, available tomorrow in two different versions, with a price range of $79.99 to $99.99. This Razor Nabu Cost is very competitive and budget friendly, which is really attracts the young users.

He started this blog as a hobby to show his affection for gadgets, but over the time this hobby became professional. And now he is working as a full-time blogger, but in free time he loves watching movies and games. PayPal donation for TechToyReviews will be appreciated.
@https://twitter.com/Techtoynews
Previous Best System Monitor Apps for Android
Next Xolo Opus 3 with 5MP Front Camera for Selfie