Panasonic Toughpad Tablet starting price of 1299 USD at online. Panasonic recently introduced this ToughPad FZ-M1 and the company calls it a tablet PC. This is a thinnest and lightest tablet, which is using Intel Core i5 processor. This tablet weight is 544g, while thinness is 17,178mm. Because of Toughpad line this owns high strength, good resistance, impact and work in harsh environments. This Panasonic tablet has in built Windows 8.1 Pro and no fan on the CPU due to high energy saving. Besides the i5 chip version is also available offering a Intel Celeron processor to save costs. 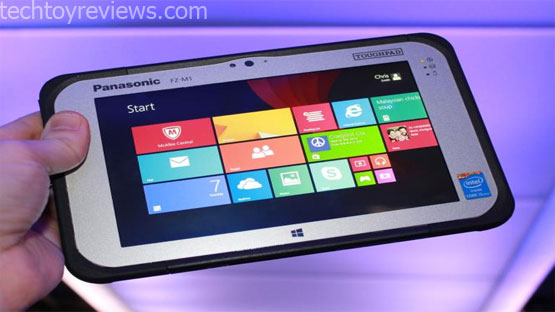 7 inch Panasonic Toughpad Prices, will start on the sales in the United States this month with prices ranging from 1299 USD to 2099 USD.

Panasonic FZ-M1 ToughPad guards against shock, water resistance and extreme temperatures. The device has MIL-STD-810G shock, which is allows the bearing to fall from a height of 1.5 meters, with standard IP65 rated for water-resistant and dust. Notably, the ruggedized tablet is designed without cooling fans.

Panasonic ToughPad has a 7 inch display with a resolution of 1280×800 pixels for visibility under sunlight, wide viewing angle and reinforced glass coating.

Prices start at 1299 USD for the version equipped with Intel Celeron Processors, while the price of 2099 USD has Intel Core i5 Processors. Basic version comes with 4 GB RAM and 64 GB of internal memory. Users can choose the level of storage capacity of 128 GB or 256 GB and RAM up to 8 GB.

The battery inside the toughpad promises to extend usage time 8 hours, but users also have the option to equip a higher capacity battery for extended usage time 16 hours.

Panasonic tablet 7 inch display used ultra-sensitive touch technology, so that the user is wearing gloves may still be touching the screen.

Panasonic company said, Toughpad FZ-M1 battery can be removable and the usable up to 8 hours. It was accompanied by rapid charge technology so users only need 2.5 hours of fully charged battery. If needed, the Panasonic tablet longer has the option of a high-capacity battery with the usage speed up to 16 hours.

He started this blog as a hobby to show his affection for gadgets, but over the time this hobby became professional. And now he is working as a full-time blogger, but in free time he loves watching movies and games. PayPal donation for TechToyReviews will be appreciated.
@https://twitter.com/Techtoynews
Previous Samsung W2015 flip smartphone with excellent design
Next Lenovo Sisley S90 smartphone replica of the iPhone 6