Panasonic DMC-CM1 is a special camera when it owns the ultra-thin appearance with the unique features of a smartphone. Recently, Panasonic has launched a Panasonic Digital Cameras Lumix Latest Model called DMC CM1. This is a superior product with many features available in a smartphone. 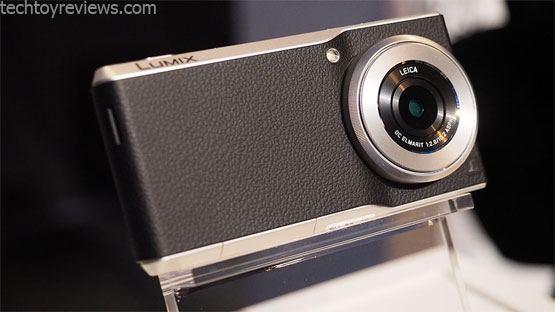 Panasonic no longer want to produce smartphones in the past 2 years, but for some reason they decided to return to the market with a unique product that DMC-CM1. Panasonic does not see it as a phone, but they call it “camera connector features”. Panasonic DMC-CM1 MOS image sensor used by 20MP, larger than most Cameras with Leica Lenses on the market. This camera is expected to be sold in France and Germany in November 11/12 to cost around $ 900 to test the user’s needs before Panasonic offer other decision.

Panasonic DMC-CM1 use ELMARIT Leica DC lens with 28mm focal length and maximum aperture of F2.8, F11. Unlike most other phones, Panasonic allows us to change the aperture of the device in order to create the visual effects in accordance with the shooting. With an 1 image sensor, the depth of field of CM1 promises more dramatic than the current phone, we can remove more obscure fonts or export a self shooting scene. Most impressive is CM1 using the mechanical shutter not electronic shutter.

In terms of specifications, Panasonic Lumix Digital Camera has a touch Full HD 4.7 inch screen, it has 6.2 million dot, approximately 5 times higher than the camera which stood at 1.2 million dot. The camera uses Snapdragon 801, 2GB RAM, 16GB internal memory, expansion via microSD memory card slot, and Android 4.4 with Panasonic Lumix Battery of 2600mAH capacity. Snapdragon 801 help the DMC-CM1 shoot 4K videos, another big difference compared to the other cameras. Panasonic Venus Engine is also equipped with a firm to handle images not depend on Qualcomm chips.

He started this blog as a hobby to show his affection for gadgets, but over the time this hobby became professional. And now he is working as a full-time blogger, but in free time he loves watching movies and games. PayPal donation for TechToyReviews will be appreciated.
@https://twitter.com/Techtoynews
Previous HP Slate 17 Hybrid of Tablet and Desktop
Next Lumia 930 review: perfect window smartphone