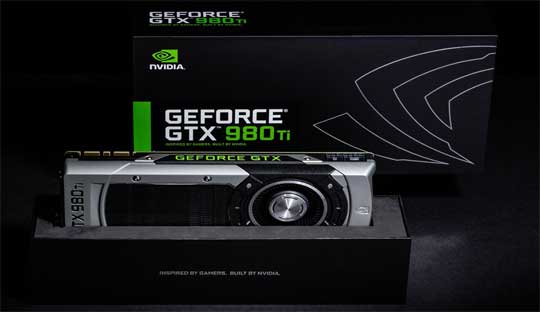 As the name suggests, this is a more powerful version of the GTX 980 and NVIDIA aimed at customers who want to use 4K gaming or want to experience a virtual reality applications. The company added that the NVIDIA 980 Ti can play Battlefield 4 and Shadow of Mordor at the maximum configurations and frame rates up to 30fps. Even GTA V with very high configurations also achieved 31.6fps, or as The Witcher 3 4K resolution is maintained at 45fps. The NVIDIA GeForce GTX 980 Ti Price around $649 and will be sold within this week.

The GTX 980 Ti uses 6GB GDDR5 memory, and this is one of the main factors that help to play high quality 4K games without facing much difficulty by caching the wider picture. So you can easily compare with the GTX 980 4GB. The GTX 980 Ti has also GM200 Maxwell, same type as on the NVIDIA’s most powerful GTX Titan X processor, while the price up to $ 1,000.

Finally, NVIDIA also introduced a new image rendering technique to help better GPU processing when used with virtual reality devices. This technology uses the multi-projection architecture of the GeForce GTX 980 Ti GPU to render multiple viewports in a single pass. According to NVIDIA, the current technique will complete 2D image and then bend it, this makes GPU resources squandered due to handle some pixel that ultimately they would not be exported virtual reality glasses. Meanwhile, the new GameWorks VR will first analyze the resolution of the glass, then building the individual components of the image in the most appropriate resolution and utilize GPU GeForce GTX 980 Ti to transplant them into the final results. Thanks to this approach the virtual reality gaming performance will be improved. VR SLI technology Multiple GPUs can be assigned a specific eye to dramatically accelerate stereo rendering. With the GPU affinity application programming interface, VR SLI allows scaling for PCs with two or more GPUs.

Also, thanks to Direct Mode, users can easily plug-and-play virtual reality glasses to the computer and use without having to go through complex configuration steps. Check out GTX 980 Ti Specs below:

He started this blog as a hobby to show his affection for gadgets, but over the time this hobby became professional. And now he is working as a full-time blogger, but in free time he loves watching movies and games. PayPal donation for TechToyReviews will be appreciated.
@https://twitter.com/Techtoynews
Previous Have you reserved your free Windows 10 Copy?
Next Asus officially introduced a ZenFone Selfie for Selfie lover at Computex 2015