After the success of version nokia X, nokia mobiles India has continued to give users the opportunity to own new Nokia smartphones. Nokia XL Phone sleek and especially with the Android operating system in  Nokia’s style. With this operating system users can have Live Tiles interface experience while can install up to 75% of Android apps. 5inch display size highlighting with the improvements. Nokia XL retains features from colored plastic shell with very fine hardware to match the needs of the users and nokia xl price is also very affordable just Rs. 7,960. 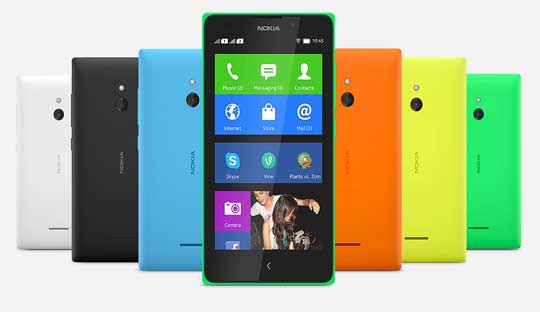 Nokia XL still continues the characteristic design of the nokia lumia line shell with different color, that can be changed as the preferences of the user. Besides, the display with a Live Tiles interface with striking colors also contributes to attracting a new youth with eye-catching design. The front panel has only one button instead of 3 buttons commonly found on other Android devices. This button acts as the “back” button, in addition to returning to the home screen simply press and hold this button for a few seconds.

Platform By using an Android 4.1 operating system, Nokia has given users the chance to experience the top Android apps on a device that previously only compatible with dedicated applications for Windows Phone. Although no pre-installed Google applications like Gmail, Google Maps, and Play Store but in return the user will be provided with the core applications of Nokia and Microsoft as Nokia’s mapping applications, search engine Bing and Microsoft’s app store.

Optimal configuration for entertainment also smoother. Although the phone is not in the top configuration, but Nokia XL ensures smooth performance for basic tasks as well as better handling of applications, gaming and entertainment. It has a Qualcomm 1GHz dual-core processor with Snapdragon S4. Users can freely enjoy the games such as Plants vs. current Zombies 2. It has quick interactive connection between applications like Skype, Facebook and Web browser.

Nokia XL will bring more exciting experience with the camera has a resolution of 5MP autofocus assist lamp and the flash for low light photography. Besides, features 480p video recording @ 30fps resolution will allow you to save the more interesting moments. In addition, the 2MP front camera resolution for still image quality is bright and clear, so you are confident to make calls video calls. Price of Nokia XL in India at online store Rs. 7,960 and Nokia XL Dual Sim Price Rs. 9,250.

He started this blog as a hobby to show his affection for gadgets, but over the time this hobby became professional. And now he is working as a full-time blogger, but in free time he loves watching movies and games. PayPal donation for TechToyReviews will be appreciated.
@https://twitter.com/Techtoynews
Previous Gionee V6L LTE and Gionee P5L LTE Smartphones Now available in India
Next Top 10 Tablets with Thinnest design of Today