Lumia 532 will be the first smartphone running Windows 10

Two weeks ago, Microsoft announced they are going to launch two new low-cost smartphone running Windows Phone 8.1 at the beginning of next month, however, this plan has slightly changed due to the contribution to the launch of Windows 10.

Under the plan, two new phones called the Lumia 532 and 435 will be sold on the market in mid-February with the operating system Windows Phone 8.1. However, the new business news is that Microsoft’s plans to release Windows 10 for Smartphone devices.

Specifically, the Lumia 532 will be equipped with the new operating system instead of Windows Phone 8.1, thereby becoming the first device in the world run Windows 10 platform. Microsoft Windows 10 was first introduced in October 2014, Windows 10 platform can run on many different devices, not just the desktop or PC, it also supports the latest mobile devices and smart tablet. 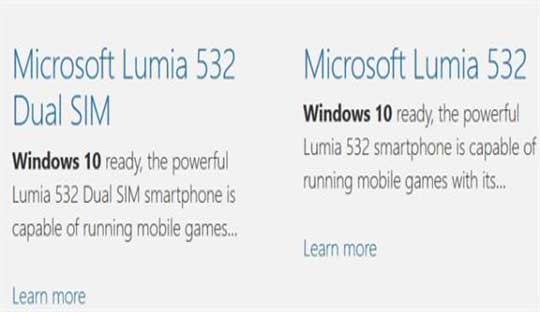 Microsoft Lumia 532 comes with the Snapdragon 200 chip, 1.2GHz quad-core Cortex-A7 processor and 1GB of RAM. The internal memory of the device is recognized 8 GB, MicroSD memory card slot supports up to 128 GB, and 30GB of storage for free on OneDrive.

The mid-range Lumia 532 Smartphone available in the single SIM and Dual SIM version. The phone will dock in the European market, Asia Pacific, India, Middle East and Africa in February. The Lumia 532 price is 79 euros.

Check out Lumia Nokia 830 Price Below:

He started this blog as a hobby to show his affection for gadgets, but over the time this hobby became professional. And now he is working as a full-time blogger, but in free time he loves watching movies and games. PayPal donation for TechToyReviews will be appreciated.
@https://twitter.com/Techtoynews
Previous Panasonic Lumix GF7 with 16MP and flip display priced at $ 600
Next Asus EeeBook X205: Mid-range Notebook for student in just Rs. 14,999