The Logitech company has recently introduced a portable speaker was renamed Megaboom, is the upgraded version of the former Logitech UE Boom – UE Speaker. 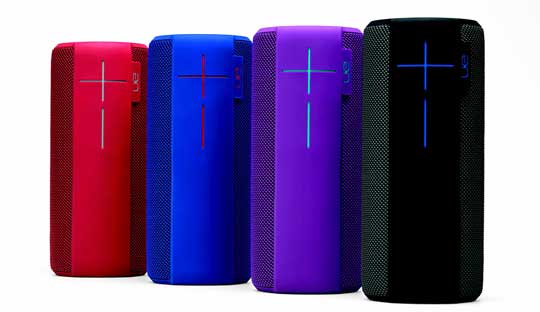 The Logitech Speakers have a very eye-catching design by cylinder shape, modern appearance with two very large volume keys. Compared with the first generation UE Boom, Megaboom comes with larger size, for greater capacity and also deeper bass. You can use this Logitech Powered Speakers as single 360 degree speaker or linked to a two-speaker system Stereo left and right, but with the price up to $ 299.99, you hardly want to buy two speakers for its very high price. Logitech UE Boom Prices $ 199.99.

Logitech Megaboom length more than 20 cm, weighs less than 1 kg, water-resistant design, there are many colors to choose, Logitech Speakers Bluetooth use a wireless connection to play music from your phone or tablet, and users can update software for speaker or Logitech speaker drivers download via an OTA wireless connection. The Logitech Megaboom battery lets play music continuously for 20 hours after fully charged. Specifically, you can also use its app on your phone as a remote control speaker on/off, turn on the alarm, custom sound setting etc.

Logitech Megaboom will be available soon in this month in the various countries such as Europe, US and Asia only in $ 299.99 – approximately 18,898 rupees.

He started this blog as a hobby to show his affection for gadgets, but over the time this hobby became professional. And now he is working as a full-time blogger, but in free time he loves watching movies and games. PayPal donation for TechToyReviews will be appreciated.
@https://twitter.com/Techtoynews
Previous Samsung officially launches Galaxy A7 with a price tag of $400
Next Garmin SmartWatch Collection: Vivofit 2, Fenix 3, Epix and Vivoactive at CES 2015