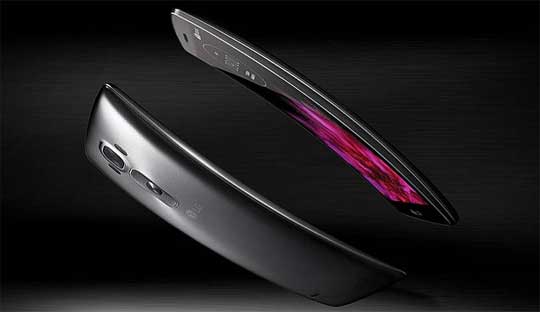 The LG G Flex 2 has a positive impression in the recent CES 2015 event. LG G Flex 2 is the first smartphone equipped 64-bit Snapdragon 810 chip, including 2.0 GHz Octa-core processor along with 2 GB RAM. It has curved screen design as its predecessor LG G Flex cell phone design with hard keys are located on the back of the tradition since the LG G2. The curved screen, allowing the user to touch the ear at the same time when using the microphone close to mouth to talk, as well as providing entertainment experience differs from most other smart devices.

Besides curved screen, the LG G Flex 2 also possesses the ability to restore the scratches on the casing as the predecessor LG Flex Phone. This unique feature has been improved a lot on this new device can help recover scratched in just 10 seconds.

The rear camera of the LG G Flex 2 reach up to 13 megapixel with dual tone LED flash, also supports laser autofocus and OIS+ optical image stabilisation. While front has a 2.1 megapixel camera to take selfie pictures and make a video call. The LG Curve phone is packed with a 2GB of RAM, 32GB of internal memory and also supports microSD card slot to expand memory.

As mentioned, the LG G Flex 2 will be sold in India at a price of Rs. 55,000, including two red and silver colors. Currently, the company just launched a 32GB version for this market.

He started this blog as a hobby to show his affection for gadgets, but over the time this hobby became professional. And now he is working as a full-time blogger, but in free time he loves watching movies and games. PayPal donation for TechToyReviews will be appreciated.
@https://twitter.com/Techtoynews
Previous LG 105-inch 5K TV officially launched in India
Next Micromax Canvas Juice 2 with 3000 mAh battery and Android Lollipop OS